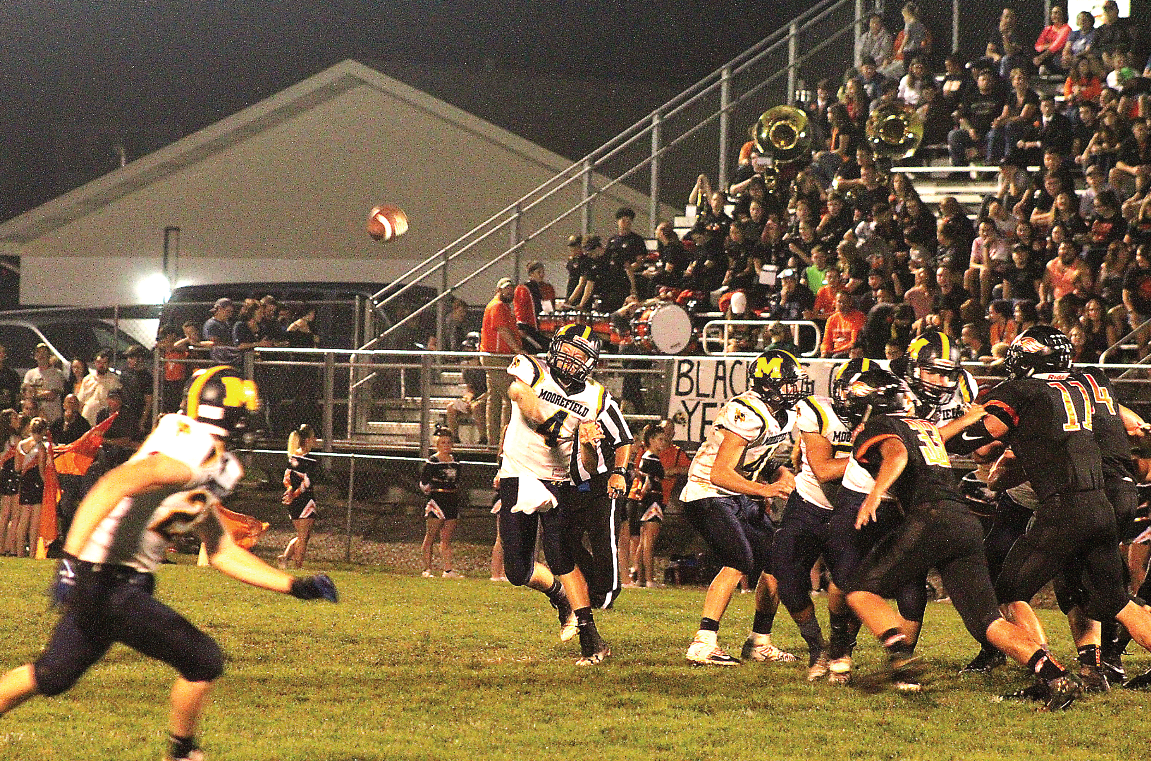 By: Mike Mallow
In: Sports
With: 0 Comments

South Harrison dropped the Yellow Jackets in Lost Creek with a 48-3 victory last Friday, however Moorefield was still kicking through the adversity.

“It is pick your poison. We are so young that we’re dumb. We can tell guys to run in there and hit ‘em. It is like Huggs says up there in Morgantown, respect all and fear none. They gave it their best and fight all the way to the end. That’s all I can ask of a young group,” Moorefield Football Coach Josh See remarked.

“If you’re going to put lumps on Moorefield, you better do it now. It’s a project and it’s growing. We get better every single week. We have six seniors and four of them play, three juniors and one of them plays with the rest being made up of sophomores and freshmen. We only have five upperclassmen. It’s a work in progress and single A football is like that. You are going to have your up years and your down years. The well’s full or the well’s dry. Right now the well is a little bit dry, but it is starting to trickle in and it will get a lot better.”

The lone scoring highlight for Moorefield was freshman kicker Atikilt Tamiru nailing a 51-yard field goal in the first quarter which is the longest kick in the state so far this season.

That kick had the distance to go 60 yards and the Yellow Jackets players were buzzing with excitement including a little dance celebration by Tamiru and some teammates raising their arms to signify the field goal was good.

Having times like this during a tumultuous season shows that the Yellow Jackets have fun and play with heart and determination.

A reverse play by Freddie Canary to start the game netted 11 yards for the Hawks with Moorefield’s Jonah Hose and Will Brown making the tackle.

On second down, Canary dodged defenders on a nine yard pickup for a first down inside midfield before Chase Anderson made the stop.

Six plays later, South Harrison’s Landon McFadden slipped away from a tackle to reach the end zone for the game’s first touchdown and the extra point made it 7-0 at the 6:31 mark.

It took ten plays for the Yellow Jackets to settle on the long field goal after reaching the six yard line and getting pushed back in a span of four and a half minutes.

Moorefield started at its own 35-yard line and Matthew Mongold caught a screen pass from Brent Moran, but was dropped for a loss by Brenten Barnette.

Matthew Jenkins was stopped in the backfield by Bo Haymond and company with the Yellow Jackets sitting at the 28.

Roger Myers snatched a pass from Moran and dashed down the gridiron before being chased down by Canary and Nathanial Wright on a 49-yard play to the Hawks 23.

Anderson made an eight yard catch in the red zone at the 15 and Wright made the tackle along the sidelines.

Quentin Crider caught a pass for a first down at the six yard line and it looked like Moorefield was in business.

Moran escaped a rush in the pocket and was hit during the throw which fell incomplete, but an offensive infraction sent the Yellow Jackets back tot he 26-yard line.

Raymond and Camden Barnette sacked Moran on the next play for a six yard loss, then Jenkins was stopped in the backfield by Ryan Anderson and several players.

Moorefield’s receiver slipped on third down as the pass fell out of reach, then Tamiru came on the field to knock down the 51-yarder at the 1:54 mark.

“That was an awesome kick,” Coach See noted.

The Hawks went into Yellow Jacket territory on a run by Barnette at the 31-yard line, then the ball was fumbled away on a poor snap with Kennan Mongold making the recovery at the 44.

Moran was sacked by Anderson, then an incomplete pass and false start pushed the Yellow Jackets back to the 35.

South Harrison’s Landon McFadden knocked down the third down pass to force a punt, but Canary retreated on the return and was tackled at the 15-yard line by Crider and Jenkins.

Three plays later, Wright slipped away from tackles for a 69-yard touchdown run at the 8:54 mark of the second quarter to take a 14-3 lead.

A sack during the ensuing possession by Anderson led to a three and out by Moorefield.

On second down from the 39-yard line, McFadden broke free from the Yellow Jackets grasp several times during a 56-yard run and was wrestled down at the five yard line by Matthew Mongold.

Jenkins, Hose, and Kennan Mongold made stops to force a fourth down at the four yard line, but Canary managed to reach goal line on a stretch for the touchdown at the 3:51 mark and Chase Anderson denied the conversion pass, 20-3.

Moorefield was at the 19-yard line starting the next series, but a sack by Hawks’ Nathan Stickel spell trouble at the 10.

A catch by Moorefield’s Javen Fawley brought the ball to the 20-yard line, but pressure caused the next pass to go a bit too high off his fingertips leading to a punt.

South Harrison took advantage of a short field at the 41-yard line by scoring in seven plays ending with a one yard run by Canary with 20 seconds left in the half andColombo’s kick made it 27-3.

Fawley made an 11-yard run passing midfield to end the half for the Yellow Jackets.

Moorefield started the third quarter with a four yard connection to Crider reaching the 28-yard line, but an intentional grounding call on the next play did some damage.

Moran managed rush outside for ten yard back to the original line of scrimmage, but Moorefield punted on fourth down.

Canary moved the Hawks to the Moorefield 35-yard line on second down during a 20-yard run with Crider and Brown making the stop.

McFadden was tackled at the 23-yard line by Pedro Santiago.

South Harrison found the end zone again on the seventh play with Canary rushing in from the 17-yard line for a 34-3 advantage at 7:05.

Matthew Mongold had a good return to put Moorefield at the 33-yard line, but a two yard catch by Jenkins was all that could be mustered up as a pass was deflected by Jaren Robinson and Kolby Hunt’s diving attempt was out of bounds before having to punt.

Wright made a huge block on the return as Canary dodged tackles to reach the 39-yard line.

Facing third down from the 40-yard line, Canary hurdled a player and was finally tackled by Mason Meek and Jacob Young on a 13-yard run to the Moorefield 47.

McFadden was tackled by Kennan Mongold and Fawley along the sidelines during a 21-yard run to the 26.

Camden Barnette made four carries to bring the Hawks down to the one yard line, then Canary slipped in for a touchdown with 47 seconds left in the frame to extend the lead to 41-3 with the kick.

Moorefield wasn’t able to convert on fourth down on the next possession as Barnette made a sack at the 27-yard line.

Chase Anderson notched a sack for the Yellow Jackets on the Hawks backup quarterback, but four plays later Marshall Hobbs scored a touchdown on a three yard run with 5:10 to go, 48-3.

There was a running clock and Moorefield’s Dequavious Kornegay made three carries for a handful of yards before punting away and a kneel down by the Hawks ended the game.

Having a huddle after the game raising helmets high and shouting loudly, there were no signs of the Yellow Jackets being crushed by an 0-5 season which is only the fifth time this has occurred in program history dating back to 1927.

Moorefield has a bye week.