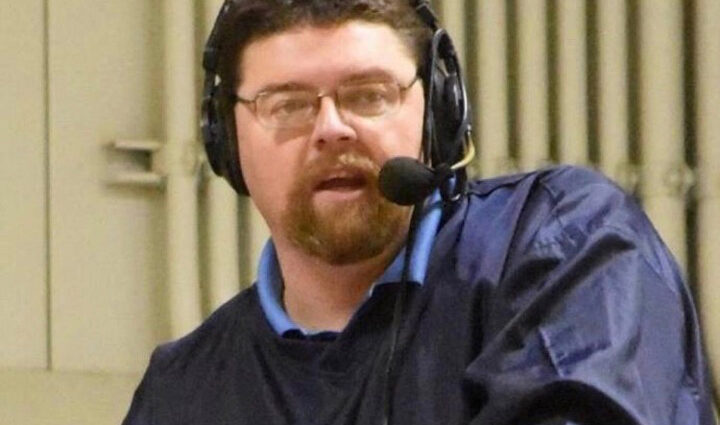 A squirrel dashed across the East Hardy Football field during a playoff game and eventually scored a touchdown with Hardy County’s own radio broadcaster Sam Blizzard making the play-by-play.

This was one of the most unique broadcasting moments for Sam Blizzard during his career behind the microphone having called over 300 games for the tri-county area including Hardy County, Grant County and Pendleton County.

“I was doing a football game with Bishop Donahue at East Hardy and a squirrel ran on to the field as I was coming out of a timeout. Both teams stayed on the sidelines and I was doing play-by-play of the critter running down the field,” Sam Blizzard remarked about the funniest moment in broadcasting.

Blizzard enters his eighth season as a sports radio broadcaster this Fall and has been in the booth with WELD for the past six years, the radio station is based here in Hardy County in Fisher.

“I guess just a love of sports initially got me interested in broadcasting. It is a good way to stay close to the teams and the games in the area. I believe the tri-county area is often overlooked on a state wide level when it comes to the quality of teams, players and coaches that we have here. I see it as doing my part to publicize the quality of play in the area be it with a broadcast or the accompanying live audio stream. I strive to paint a picture for the listener describing the sights and sounds of the game that I am covering,” Blizzard commented.

Blizzard does his best to bring the game alive on the radio broadcast sharing the sights and sounds of each contest for the listeners to enjoy.

Blizzard has lived in Hardy County for 20 years this October and has been involved in the community not only as a radio broadcaster, but an avid supporter and coach of youth sports leagues.

Born and raised in Harman, W.Va., Blizzard mentioned there was a limitation on sports during the 1970’s and the only sport offered at Harman High School was basketball.

“Growing up there in the late 70’s there was no ESPN or cable sports on TV. You would get a college game on Saturday and pro football on Sunday afternoon so college and pro sports were not followed as much at that time,” Blizzard noted.

“The local high school was your connection to sports. I remember thinking if I could just wear the uniform and sit on the bench I would be big time. The only sport offered at Harman at that time was basketball so if you wanted to play that’s what you did.”

Blizzard developed his basketball skills in his driveway starting in the third grade using an oak pole with a wooden backboard that had a rim attached.

“That’s where I spent most of my time from about third grade on. Once I got to high school I started three years on the varsity team. We didn’t win a lot, but I would not trade the experience for anything,” Blizzard added.

Blizzard graduated from Harman High School in 1989 and furthered his academic pursuits at Davis and Elkins College earning a degree in Business Management, but initially studied education with a desire to be a physical education teacher during his first year prior to changing majors.

The love of sports never faded for Blizzard as he became a certified coach and returned to his alma mater becoming the varsity girls basketball and junior high head coach at Harman High School during the 1995-96 season.

“The sports fever was too much for me to get away from so I took the coaching course offered by the SSAC in 1995. I went back to Harman to coach the girls varsity and junior high programs for the 1995-1996 season, which happened to be the first year that the girls games were moved from the fall sports season to the winter with the boys,” Blizzard said.

In 1996, Blizzard married Angel Chewning who was a Moorefield graduate and they lived in Bridgewater, Va. for over four years before moving back to West Virginia in October 2000 taking up residence in Moorefield.

Sam Blizzard traveled to Harrisonburg for work for a decade before beginning a position at Allegheny Wood in Petersburg in January 2011 as an export specialist shipping lumber and logs overseas.