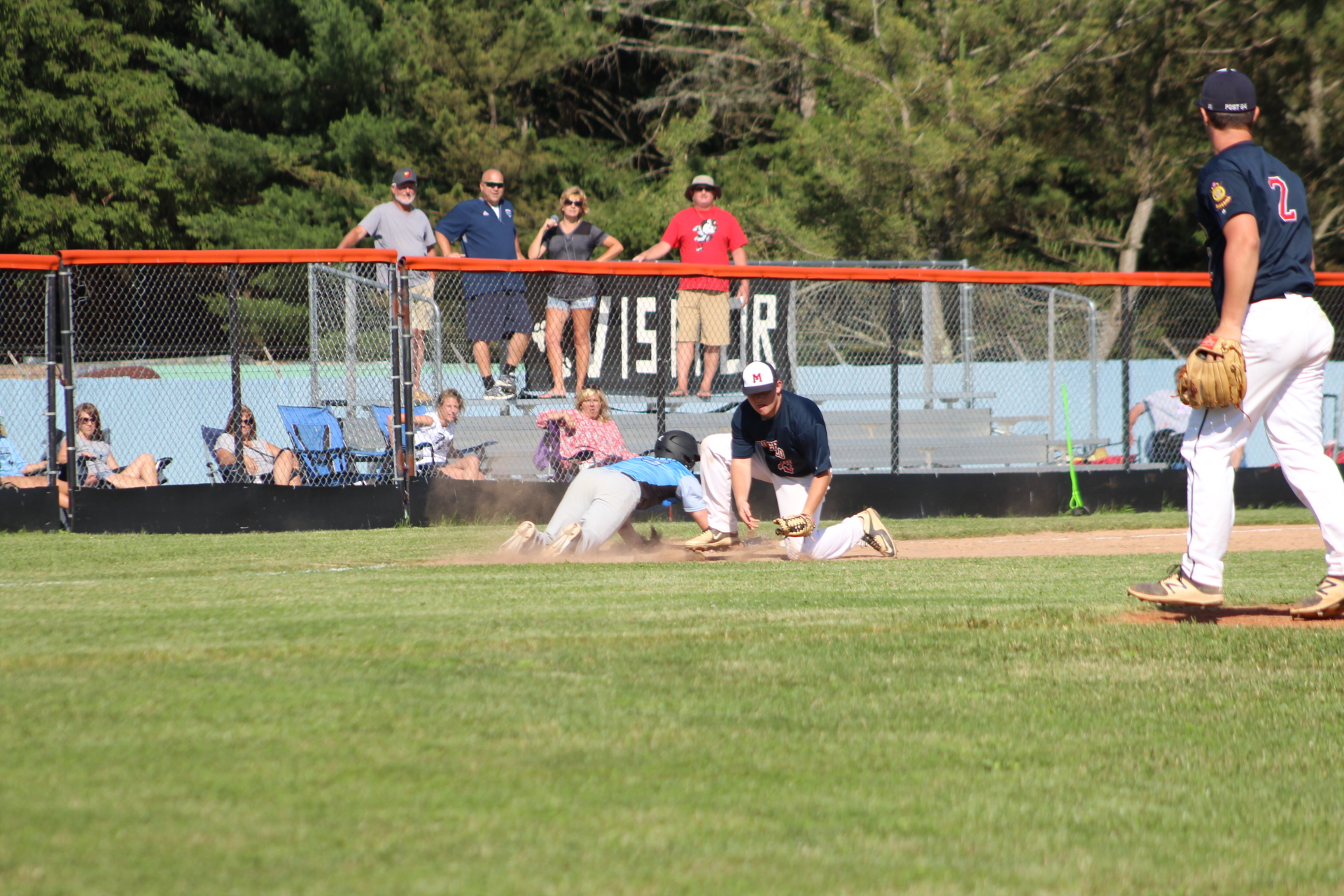 “For us, we got to be on the top of our game when we play teams like that just to stay in the game. We’re young and not as big as some of these teams and what they can draw from. Everybody’s got to hit, throw, run and catch it. If we do those things, then we stay in games. If we are missing one of them, we’re going to struggle. I told the kids ‘you’ve got to bring it everyday and win or lose, you’ve got to fight’. We will come back tomorrow and get them again.”

Moorefield Post 64 pitcher Isaac Van Meter allowed a leadoff single to Circleville Post 134’s Andrew Barnhart as shortstop Hayden Baldwin fielded the ball out of the dirt and the throw arrived late and wide on the catch for first baseman Jacob Mauzy.

Circleville Post 134 got a second baserunner as Cam Farley was hit by a pitch, then Van Meter countered with a strikeout to Brett Carson.
Noah Cline stepped to the plate and ripped the first of three RBI singles on the day with the ball bouncing into center field giving Circleville Post 134 a 1-0 edge.

Moorefield Post 64 escaped the inning without further damage as Chris Conrad was out on an infield fly rule, then Farley stole third base before Austin Whetzel caught a pop-up by Travis Grim.

Blake Watts hit into a fielder’s choice double play, then Jake Ours had a shot knocked down by the leaping effort of Circleville Post 134 third baseman Cody Anderson with a recovery in time for the out at first base as Moorefield Post 64 came away empty.

Van Meter threw a strikeout to Circleville Post 134’s Seth Lockard to begin the second inning, then Anderson launched the ball and Moorefield Post 64 second baseman Fisher Wheeler made an outstanding leaping save only to have the ball slip out and the throw went past first base.

Anderson was safe on a fielder’s choice hit by Austin Nunemaker as Whetzel threw to second base and it was determined Wheeler was off the bag.

Barnhart connected for an RBI single in right field to put Circleville Post 134 up 2-nil.

Farley drew a walk from Van Meter to load the bases, then Carson flew out to Moorefield Post 64 left fielder Jayden Moore.

Cline garnered an a two-run producing single into right field to extend the lead to 4-0.

Conrad was hit by a pitch, then Farley scored on a passed ball before Van Meter ended the side with a strikeout after a timeout, 5-0.

“I think we just hit the ball pretty good. Our four-hole hitter Noah Cline really got us going, he had five RBIs the first three times up,” Circleville Post 134 manager Jeff Lanman stated.

“We got kids on base and hit the ball. Our pitching was good too. Our starter did well and we tried to get him out quick and gave the other pitchers some work. I think we played really good defensively and our shortstop Andrew Barnhart was solid. We’re a real veteran team, we have ten kids on the team who played with us last year. We have three college kids. It was a tough ask for those kids [Moorefield]. We were expecting to play some state champion players from Moorefield. We just keep moving forward. Last year was our first year here and we loved it. We had a great experience and made it to Sunday and didn’t do too well that day. We are excited and think this is a great tournament with a lot of good teams. You’ve got to play it one game at a time.”