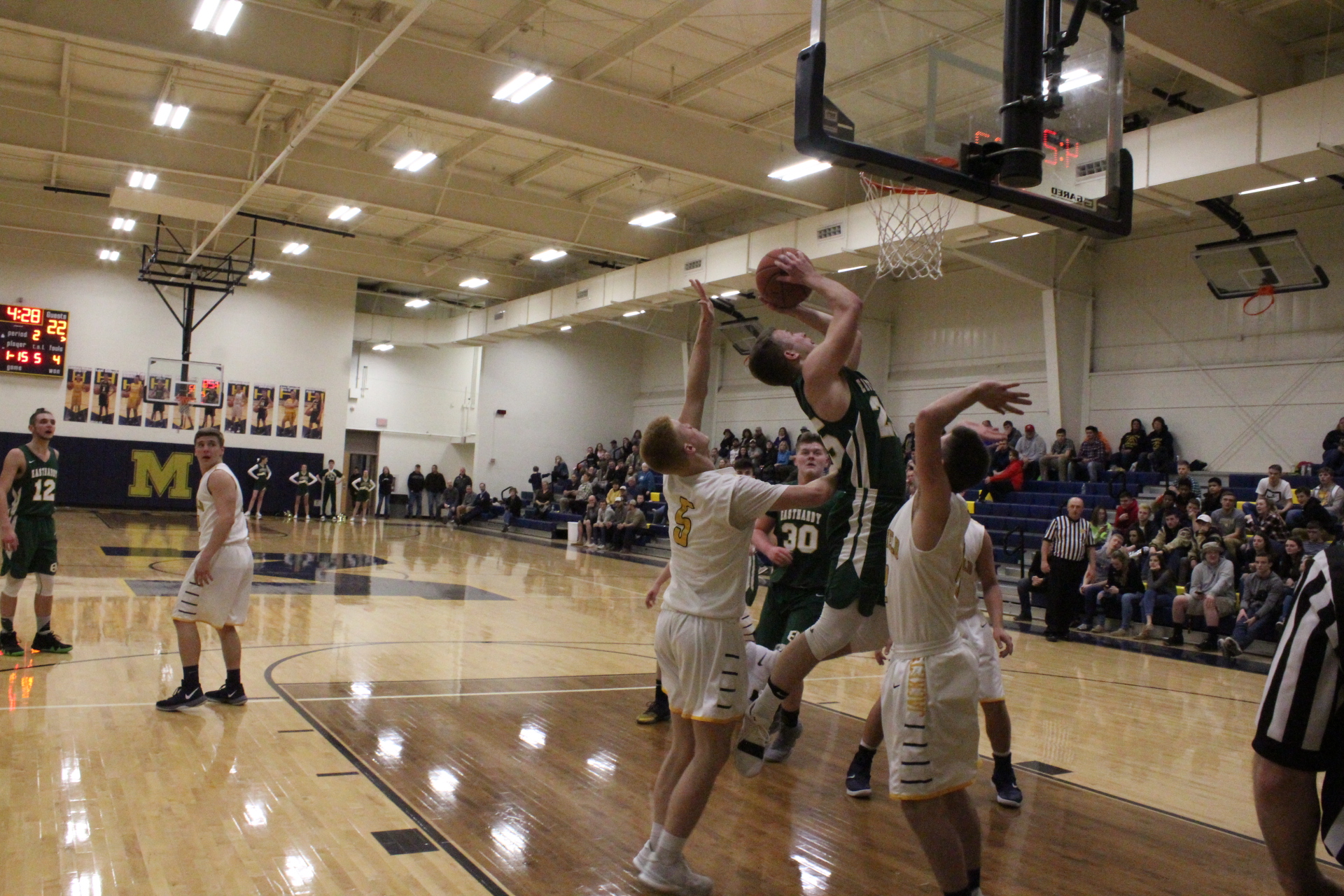 A stop sign needed to be placed in the lane to reduce the chaotic traffic flowing inside the Hive, but East Hardy navigated through the swarm of Yellow Jackets to control the boards en route to a 73-64 victory over Moorefield last Friday on senior night.
“I told our guys coming in that Moorefield it doesn’t matter what their record is, we always battle each other really hard. We knew we were going to take their best shot and we did. They came out and played really well. I thought our kids did a really good job of matching intensity and matching the physicality that Moorefield likes to play with in games,” East Hardy coach Chris Hahn remarked.
“We were able to take advantage of that with our size a little bit, because they are a little smaller this year than normal. Due to that we were able to bang inside and wear them down.”
Moorefield seniors Ben Pyles, Ben O’Neill, Blake Watts and Grant Keller were honored prior to the game.
The East Hardy duo of Aden Funkhouser and Adam Baker recorded double-doubles against the Yellow Jackets with Funkhouser netting a game-high 20 points with a dozen rebounds and Baker contributed 15 points with ten caroms helping the Cougars to collect 40 boards overall compared to 35 by the Yellow Jackets.
“It has been like this all year, score by committee. It can be somebody different each year. They don’t care who scores the points, they just want to win. Aden Funkhouser is our go-to guy and he’s averaging 17-18 per game. He is biggest and strongest guy on the floor for us and he is a handful. He is super athletic. I am super proud of how these guys have come along this year. We weren’t ready at the beginning of the year. We are playing great team ball. It is a fun group to coach and I am really proud to have coached these guys. Every win is special and the kids have embraced that Moorefield is their rival, so they get up more for the game. Moorefield has a really nice team and they will be a tough out. Whoever draws them in the playoffs will have a battle,” Coach Hahn commented.
The Cougars (10-9) led as many as 15 points in the third period, but Moorefield (4-14) didn’t let the game stretch any further with perimeter range attacks closing the gap.
The opening tip-off went out of bounds with the Yellow Jackets taking the first possession, but the initial field goal attempt hit the rim and East Hardy’s Adam Baker snatched the rebound.
The Cougars had their first attempt go awry, but Baker collected the rebound and scored at the 7:05 mark for the 2-nil lead.
A trap was set by East Hardy and a jump ball was created for the Cougars, but the ensuing shot was off the iron and Moorefield’s Ben Pyles made the rebound.
Moorefield lost the ball out of play with Baker and Funkhouser forcing the errant pass.
Moorefield’s Brent Moran and Pyles deflected passes out of bounds, but the Cougars regrouped and Funkhouser nailed a jumper at 5:19, 4-0.
A miss by the Yellow Jackets was tipped out to Moorefield’s Ben O’Neill, who connected with Moran heading into the paint for a layup at 4:44.
East Hardy responded with a 3-pointer by Chance Dove on the next series within nine seconds.
O’Neill made a jumper for the Yellow Jackets at the 4:21 mark to cut the deficit to 7-4.
Over the next minute and change both teams missed a couple of baskets with rebounds going to Moorefield’s Chase Vance and Pyles (2), while East Hardy’s Dove and Baker collected one apiece.
After the last miss during that stretch with the rebound to Pyles, the play was setup for Vance scoring on a layup at the 3:12 mark, 7-6.
East Hardy’s Cole Swanson hit a jumper and drew a foul with the extra shot going awry, then Andrew Tharp snatched the board.
Moorefield’s Matthew Jenkins made a defensive rebound, then Moran was tangled up with East Hardy’s Seth Smith with a timeout called.
The Cougars pressed and set a trap forcing Moorefield into a walk.
Funkhouser scored on the following possession in the paint with a foul drawn and the extra shot was off the mark with Jenkins hauling in the board.
Tharp collected a defensive rebound, then Funkhouser drew another foul and made both free throws at the 2:04 mark for a 13-6 Cougars advantage.
After a handful of missed shots over the next minute, East Hardy’s Rob McNeal netted a jumper with 20 seconds left on the clock.
Moorefield missed twice with a rebound by Jenkins and the latter shot attempt’s ricochet went off of the Cougars with under one second left and inbound passer Lane Ours connected with Jaydon See for a buzzer-beater jumper to make it 15-8 entering the second period.
“The difference in the game was they out-rebounded us and got to the foul line more than us. I thought we came out a little sluggish. They were really physical which gave us problems,” Moorefield coach Scott Stutler stated.
“We have them two or three shots at a time and in a game like this you can’t do that. They did a good job of being physical and getting extra shots.”