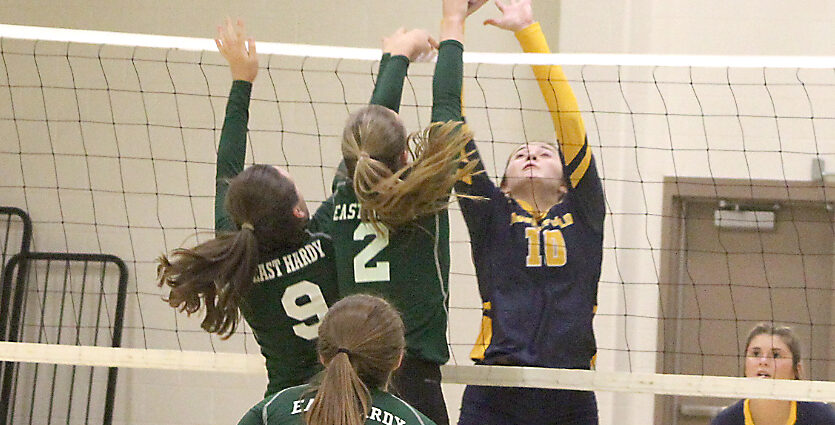 Moorefield has been controlling the volleyball supremacy during the past couple of seasons, so the Cougars had to trust the climb back up the trail to earn the victory in the Den.

“I was really proud of the girls to come back the way they did from playing on the road against Pendleton County to come out here and execute the way they did. Moorefield has a really good offense and for us to be back there keeping the ball off the floor was great,” East Hardy assistant coach Chris Hahn remarked.

“Our back row played really well and the front row adjusted to their hits. The back row cleaned up nicely. We are going to ride SierraMarie [Miller] and Erin [Riggle] all year, but honestly the difference tonight against Moorefield versus Pendleton County was our opposite hitters. I thought Gabby [Miller] and Courtney [Shank] did a tremendous job of scoring points for us and hitting the weak spot.”

The Yellow Jackets came into the contest with two strong wins over Keyser and Petersburg, but the momentum shifted with a different game plan due to issues with the lineup.

East Hardy lost a tough five-set decision on the road against Pendleton County to start the season and this was just the second match of the year with anticipation building as to what would transpire.

“You look at it and our lineup is pretty banged up. We have a lot of new faces out there on the floor which makes a big game changer for us. We didn’t move very well out there tonight and didn’t communicate. If you don’t have communication and movement, it will make for a long night. It is always a fun game whether you come here or play in Moorefield, it is just the camaraderie of what it is. We walk away from this one with a loss, but we have to just go home and prepare for our next match against Pendleton County. You have to shake it and not dwell on it,” Moorefield coach Morgan Hill See commented.

Moorefield started off with the momentum in the first set as Gracie O’Neill delivered three aces and Remington Hinkle garnered a kill for a 4-nil edge.

The Cougars caught a break as Erin Riggle tapped in a kill, then served up an ace.

The Yellow Jackets responded with a spike from Hinkle.

During a serve by Moorefield’s Sterling Kump, East Hardy’s Perry Whetzel made a dig and Riggle set for SierraMarie Miller’s attack which was returned out by Hinkle.

East Hardy’s Emily Dyer’s serve was hit out of play on the return volley by Moorefield’s Kaleigh Hunt for a 5-4 score.

Hinkle’s attack was met by a dig from Dyer, but the ricochet couldn’t be corralled.

A serve by Moorefield’s Amber Williams was hit back into the net for a 7-4 lead.

Riggle earned a point off a volley, then Miller served aces twice to cut the deficit to 9-8.

Whetzel made a dig and Dyer hit the ball over the net which the return from the Yellow Jackets going out to tie the set at 10-all.

Bot team hit the ball into the net before Whetzel scored an ace for the Cougars 12-11 edge prior to the next volley sailing out by home team.

East Hardy went up 16-12 with the help of some errors during serves by Riggle.

After a serve went out, an attack by Riggle was returned out by Moorefield’s Hunt.

Hunt created a point on an attack as the dig by Riggle landed in the net.

Moorefield’s Alyson Simmons made an attack and it was redirected out.

East Hardy’s Gabby Miller garnered a spike, then SierraMarie Miller’s volley was returned into the net, 21-15.

Williams notched a point on a kill and Hinkle delivered two aces to help the Yellow jackets cut the deficit to 21-18.

Ames went for an attack and Williams reached over the net slightly on the block attempt.

Another kill by Williams and an ace from Hailey Biser made the score 22-20.

SierraMarie Miller made a dig on a volley by O’Neill. then Ames saved the ricochet spinning it over the net to the floor for a point.

Gabby Miller recorded a block and Riggle finished the opening set with a spike for the Cougars 25-20 win.

An attack by Hinkle was returned out by Ames to begin the second set after the initial serve from Riggle.

Moorefield added another point to the lead on a spike by Hinkle.

East Hardy’s SierraMarie Miller launched the ball and Simmons made a dig, but the deflection save attempt by Marissa Ward didn’t clear the net.

The Yellow Jackets earned points off a volley by Hunt, an error and a kill by Williams for a 5-1 lead.

Riggle and Miller made kills sandwiching a shot from Hinkle for a 6-4 score.

The Cougars tied the set on two more spikes from Riggle, then Moorefield responded with a kill from Simmons.

O’Neill hit the ball out of play, then Kump tapped the ball over for a Yellow Jackets point.

East Hardy’s Courtney Shank and Kump beaded spikes before an error by the Yellow Jackets.

SierraMarie Miller recorded two straight kills to give the Cougars a 13-9 lead.

Moorefield regrouped with serves by O’Neill and points developing on attacks from Hunt and Simmons.

A couple errors, plus a block by Hinkle and her two aces served tied the set at 16-all as the Yellow Jackets kept fighting.

The ensuing serve went out of play, then Miller’s served and Riggle’s attack was redirected awry.

Simmons made block against Riggle for an 18-17 score.

Moorefield rallied to tie the set at 21-all on an ace by Kump following attacks by Hinkle and Hunt.

O’Neill notched a kill and Hinkle forced a point through a block attempt by Riggle to put the Yellow Jackets ahead 23-21.

Riggle earned a point off a failed block, but Moorefield closed out the second set win on attacks from Hinkle and Hunt, 25-22.

Moorefield started off the third set with a serve by O’Neill and East Hardy got a dig by Whetzel with a pass to Dyer going back over the net, then Hinkle smashed the ball off a pass from Simmons.

RIggle tied the set with a soft touch over the net finding the floor.

Both team made errors, then Hinkle notched a point on a kill.

Dyer landed an ace to put East Hardy up 7-3.

Hinkle launched an attack and Miller made a huge save going into the bleachers and Ames put the ball over the net, but Hunt found Hinkle for a point on the next try.

East Hardy’s Gabby Miller stepped up and made a couple blocks against O’Neill.

O’Neill counted with another attack which was returned into the net by the Cougars.

Hunt served into the net, then Miller has an attack defect off a dig by Hunt, 16-7.

Ames served into the net giving the ball back to Moorefield and Simmons had her serve spin to the back row and the dig by Whetzel was redirected into the net.

After a kill by Riggle, Whetzel’s serve landed in the net.

O’Neill served an ace for the Yellow Jackets to close the gpa to 17-11.

Moorefield made errors on an attacks by Shank and Riggle before Riggle garnered an ace as the margin went up to 20-11.

A volley from Dyer was returned out and another serve by Riggle was placed back into the net, 22-11.

Moorefield earned one more point on a kill by Hinkle, then the Cougars closed out the third set win on a service point by Dyer, 25-12.

The Yellow Jackets took a 4-1 lead in the fourth set, but East Hardy came back to tie the set at six apiece.

It was close up through a tie at 13-all with a number of volleys creating kills and errors on both sides.

East Hardy took the lead for good at 14-13 on an attack by Riggle which was returned into the net.

communicate who was to hit the ball and Simmons tried at the last moment only to sling the ball into the net.

There were net errors on both sides before a volley by Moorefield went out, 17-14.

An attack by Gabby Miller was returned into the net and Riggle slammed the ball for a 19-14 advantage prior to a timeout.

Riggle’s next attack was redirected out of bounds, then Gabby Miller found the corner for a point.

SierraMarie Miller sandwiched two aces around a kill by Gabby Miller to put the Cougars ahead 24-14.

Simmons created a point on an attack, then Biser served and it was returned by Riggle for the match point, 25-15 as East Hardy sealed the victory over the Yellow Jackets 3-1.

“There was a lot more focus, they were dialed in against Moorefield. Moorefield got the better of us the past couple of years, so we wanted to make sure we got that one. They were absolutely focused on getting that win,” Hahn concluded.