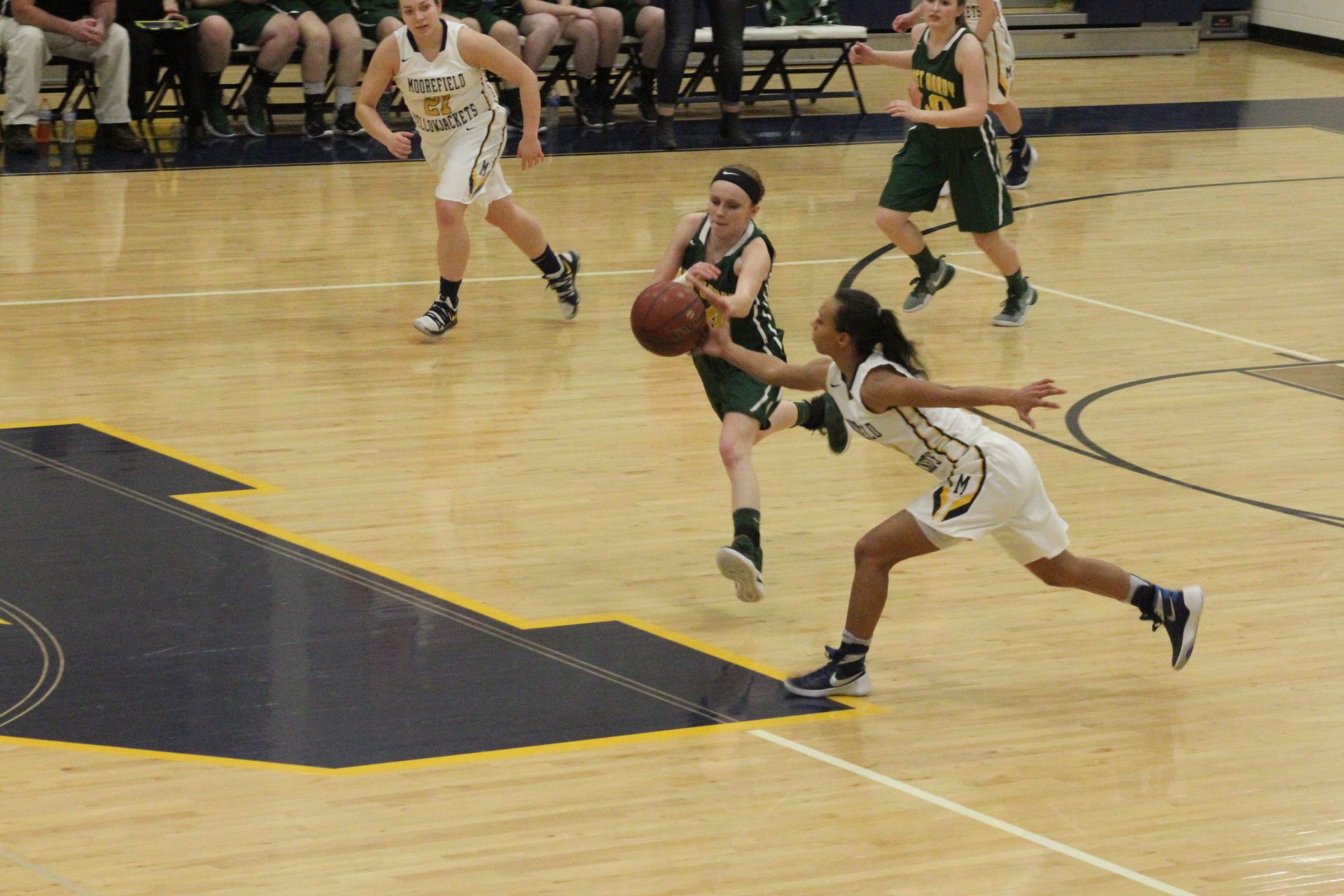 The Lady Cougars scored most of their points at the free throw line and managed to build a four-point lead with two minutes to go, but Moorefield executed a two-minute drill knocking down a pair of perimeter shots en route to dancing away with the Hardy Girls Hardwood Classic 41-36 victory on Friday in the Hive.

“We hit some big shots, but everybody contributed to that win. Lindsey [Rinker] hit a big shot and Emma [Baker] comes grabs a rebound and puts it back, then we have Madison [McGregor] with a nice feed from the top,” Moorefield Coach Paul Keplinger remarked.

“Everybody helped and gave us good minutes off the bench when we had foul trouble which really hurt us. They got 20 points off of foul shots, so we have to correct that problem. G [Gianna Fair] hit some big shots and she is big inside for us. Rebounding, we had some good box outs and people came off the bench and played sound defense. We had fouls, but they realized they have to give minutes. The girls were up for this one, but we had a tough one last night at Southern. It is tough to come back with our legs underneath us, but that is what we need to do to get where we want to be in the postseason.”

East Hardy’s Julia Hahn netted two foul shots with 2:06 remaining for a 36-32 advantage, adding to the team total of 20-of-32 free throws on the game.

On the next possession, Lindsey Rinker nailed a 3-pointer for the Yellow Jackettes and the bench and crowd cheered enthusiastically as the deficit was sliced to one point at 1:53.

The Yellow Jackettes applied pressure, then East Hardy stalled the clock trying to burn time off and Rinker alertly stepped up the defense to force a five second violation.

Moorefield’s Emma Baker struck a 3-pointer for a 38-36 lead with 33 seconds left and the Hive exploded with cheers.

East Hardy’s Lexi Strawderman tried to squeeze through a trap and was fouled by Moorefield’s Nautica Crosco sending her to the charity stripe and neither attempt fell through and Anna Riggleman snatched the rebound for the Yellow Jackettes.

Strawderman fouled Rinker with 21 seconds remaining and both shots were added for a 40-36 edge.

Hahn put up a 3-pointer and it was off the mark with Moorefield retaining possession on a rebound by Crosco and Hahn quickly made a foul with nine seconds on the clock.

Crosco netted one of two free throws for a five point advantage, then East Hardy’s Leanna Basye grabbed the rebound and Hahn launched a deep 3-pointer at the buzzer just off the rim for a final in favor of Moorefield 41-36 for the regular season sweep.

“The defensive strategy was the same as the last time, but this time they executed it and didn’t fall apart. They played well and played good defense,” East Hardy Coach Bridget Billmeyer commented.

“We have been playing good defense for a majority of the year. We missed some shots down the stretch and there were some free throws that should have fallen, but I’m sorry you can’t play eight people on the floor. The refs cost us a ton of points tonight and I don’t usually try to blame too much on the refs, but the refs on both ends cost us points. Kudos to Lindsey [Rinker], we held her the whole night and she hit the clutch shot when it was needed and that’s what a good ball player does.”