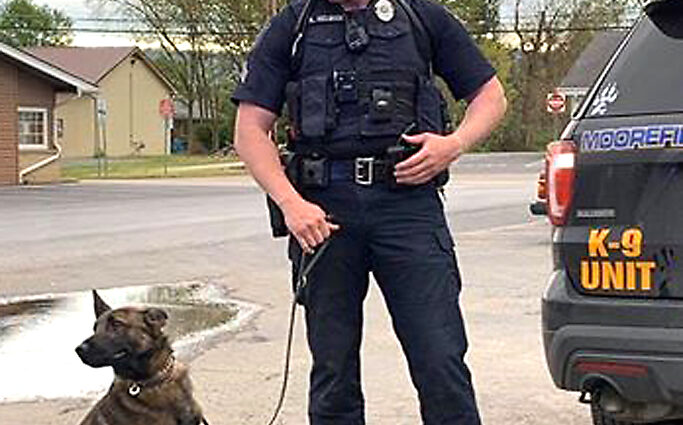 On May 1, at approximately 4 p.m., Moorefield Police Department Sergeant Kevin Helmick II and his partner K-9 Riso were conducting routine road patrol along U.S. Route 220 near the BP gas station. Sergeant Helmick observed a female subject walking down East Brighton Avenue appearing to be impaired. He proceeded to turn around in order to make contact with the female subject.

Upon turning onto East Brighton Avenue, Sergeant Helmick observed the female standing at the drivers door window of a black, two door sedan with two male occupants in the gravel lot behind the BP gas station.

When Helmick pulled into the gravel lot, the female subject began to walk away and the vehicle began to leave. A subsequent traffic stop of the vehicle, with the assistance of K9 Riso, yielded approximately 6 grams of suspected methamphetamine, approximately $3,000 in cash, materials consistent with controlled substance packaging and a semi-automatic handgun. Helmick subsequently arrested the two male occupants of the vehicle for conspiracy and

possession with the intent to deliver a Schedule II controlled substance , methamphetamine. The passenger of the vehicle was additionally charged with Person Prohibited from Possessing a Firearm.

All of the charges contained in the above-referenced arrests are merely accusations and not evidence of guilt, and each defendant is presumed innocent until and unless proven guilty.