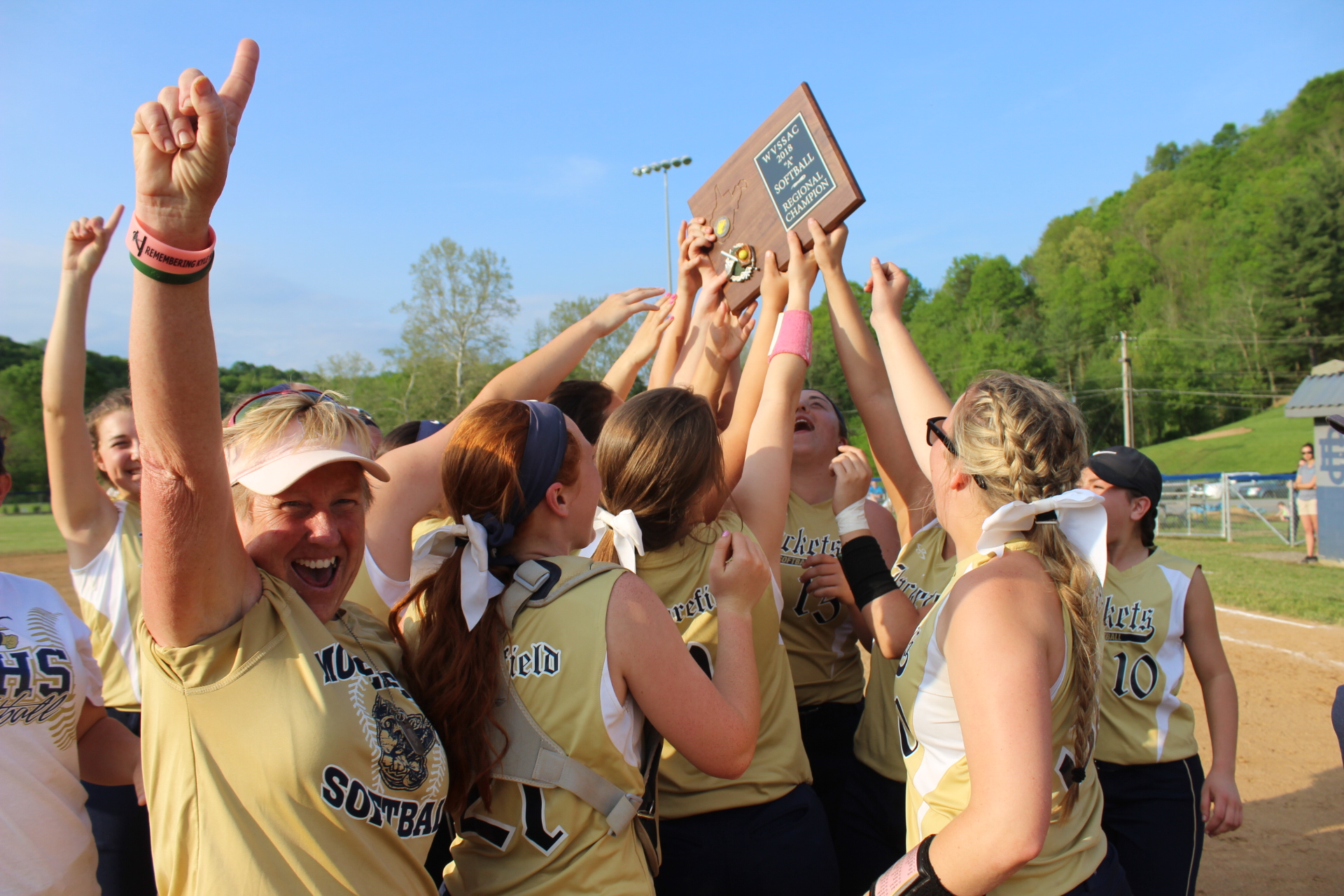 The Lady Yellow Jackets had the right guidance system traversing past the road hazards to Blacksville and paved their way to a third consecutive Class A Region II Softball Championship with a 3-1 victory over Clay-Battelle on Tuesday to reach the state tournament for the ninth time in program history and fifth time in six seasons under coach Tammie Ayers.

“This is very, very awesome. I am super proud of these girls,” Moorefield coach Tammie Ayers commented.

“It seems we are hitting the ball much better and Bekah [Markwood] pitched a heck of a game. We just kept pecking away. It’s always a different atmosphere when you come to somebody else’s field. Our parents are really good to follow, but we don’t quite have the fan base as we do at home, obviously. It’s a whole different atmosphere and our goal has been to go to Vienna. We’ve been telling them that since the last Monday in February when we started practice. The girls could taste it today and we could see they were a little bit hungry to return out there too.”

It was a bumpy ride to the region championship, but one run in the third inning and two runs in the sixth inning were just enough to bridge the gap to Vienna as Moorefield pitcher Rebekah Markwood and the defense braced for impact and kept trucking.

Coming off an 11-3 win in the first game, the Lady Yellow Jackets (22-8) had the momentum going into the second game of championship series and this time around it was a pitcher’s duel as Clay-Battelle ace Caitlyn Kassay did everything in her power to limit baserunners with 11 strikeouts compared to five by Markwood.

Based on last year’s pitching numbers for these Class A all-state first team players, Markwood had a 1.82 ERA and Kassay held a 1.74 ERA with 135 strikeouts.

Markwood started with the same result out of the pitching circle tossing a strikeout to Clay-Battelle’s Abbey Ammons.

Lady Cee Bees’ Rylee Burnette reached on an error by McGregor and Kassay singled on a left field blooper which was fielded by Moorefield’s Carmen Ketterman.

Alicia Keener hit into a fielder’s choice made by Lady Yellow Jackets third baseman Macie Zirk at her station, then Markwood retired the side with a strikeout to Ronda Petrucci to strand the Clay-Battelle baserunners.

Moorefield’s next three batters in the top of the second inning went down on consecutive strikeouts from Kassay as Tori Humphries, Alyssa Vetter and Macie Zirk were sent back to the dugout.

The Lady Cee Bees (20-6) side was short lived as well with Madison Statler hitting a pop-up to Moorefield shortstop Anna Riggleman, then Ashley Weber and Sydney Wilson grounded out to second baseman Madison McGregor.

Markwood drew a full-count walk putting two runners aboard and Hinkle came through with an RBI single bouncing into left field for the initial 1-nil edge.