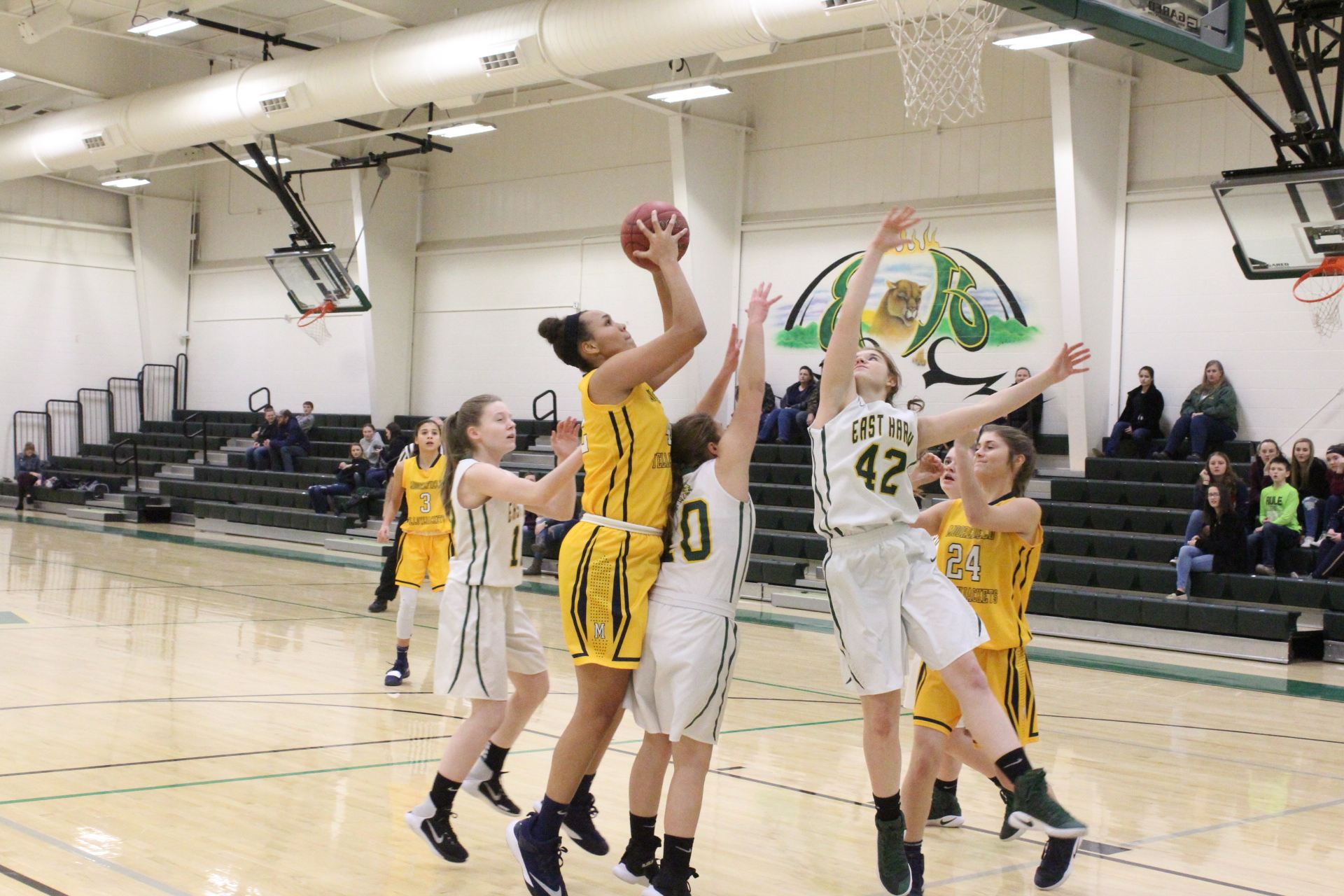 The Lady Yellow Jackets inundated the Den in Baker with a 27-5 halftime advantage before swarming to a 56-16 victory over East Hardy during the second edition of the Hardy County Girls Hardwood Classic.
“Coming off a game like we did, I thought we would come out a little flat. It took a little while to get going. We started to get more aggressive towards the end of the first half. We were consistent scoring across the board, but our first half shooting was only 35 percent. We picked it up a little 39-35 in the second half. We don’t want to develop bad habits going into the playoffs,” Moorefield coach Paul Keplinger noted.
Moorefield went on a 13-0 run in the first four and half minutes of the game, then the Lady Cougars got on the board netting four points in the final three minutes of the frame.
East Hardy’s Erin Riggle grabbed a defensive rebound to begin the game, then Moorefield’s Lexi Gilhuys stole the ball and the ensuing shot was off the mark again.
Moorefield’s Remi Hinkle was there for a rebound and scored in the paint for the initial 2-nil lead at 6:55.
The Lady Cougars lost the ball, then Riggle snatched it back before Moorefield’s Lindsey Rinker deflected two passes out of play.
Gianna Fair blocked a shot for the Lady Yellow Jackets, then made two offensive rebounds before sinking a putback at the 5:21 mark.
A minute later after missed shots both ways, Fair scored on an old-fashioned three-point play to extend Moorefield’s lead to 7-0.
Gilhuys collected a defensive rebound, then hit a 3-pointer after a collision by a teammate.
Fair hauled in a rebound and passed to Remi Hinkle, who found Rinker for a 3-pointer which gave the Lady Yellow Jackets the 13-0 advantage at the 3:33 mark.
Moorefield’s Gracie O’Neill stole the ball, but the ensuing shot went awry and East Hardy’s Jaden Fleshman made the rebound before being tied up for a jump ball.
The ball went off the rim for the Lady Cougars, then ricocheted off Moorefield out of play.
After a block by Hinkle, East Hardy’s Chelsea Keller netted a jumper at the 2:30 mark trailing Moorefield 13-2.
Riggle collected a rebound, but the ball was stolen by Rinker and O’Neill leading to a missed shot.
East Hardy’s Rebecca Whetzel snatched the defensive rebound, but the Lady Cougars lost the ball out of bounds on a hurried pass.
East Hardy’s Katie Short grabbed a rebound after a Moorefield miss, then Gilhuys committed a foul.
Gilhuys stole the ball and passed to O’Neill, who lost control of the ball entering the paint and Short collected the turnover leading to a basket by Mackenzie Blair with 15 seconds left in the first period for a 13-4 score.
“I’m happy with our defensive effort tonight, holding them to under 60 points. For us, that’s a good thing. Our shots didn’t fall and they usually don’t fall, so we’re happy with the defensive effort,” East Hardy coach Bridget Billmeyer remarked.