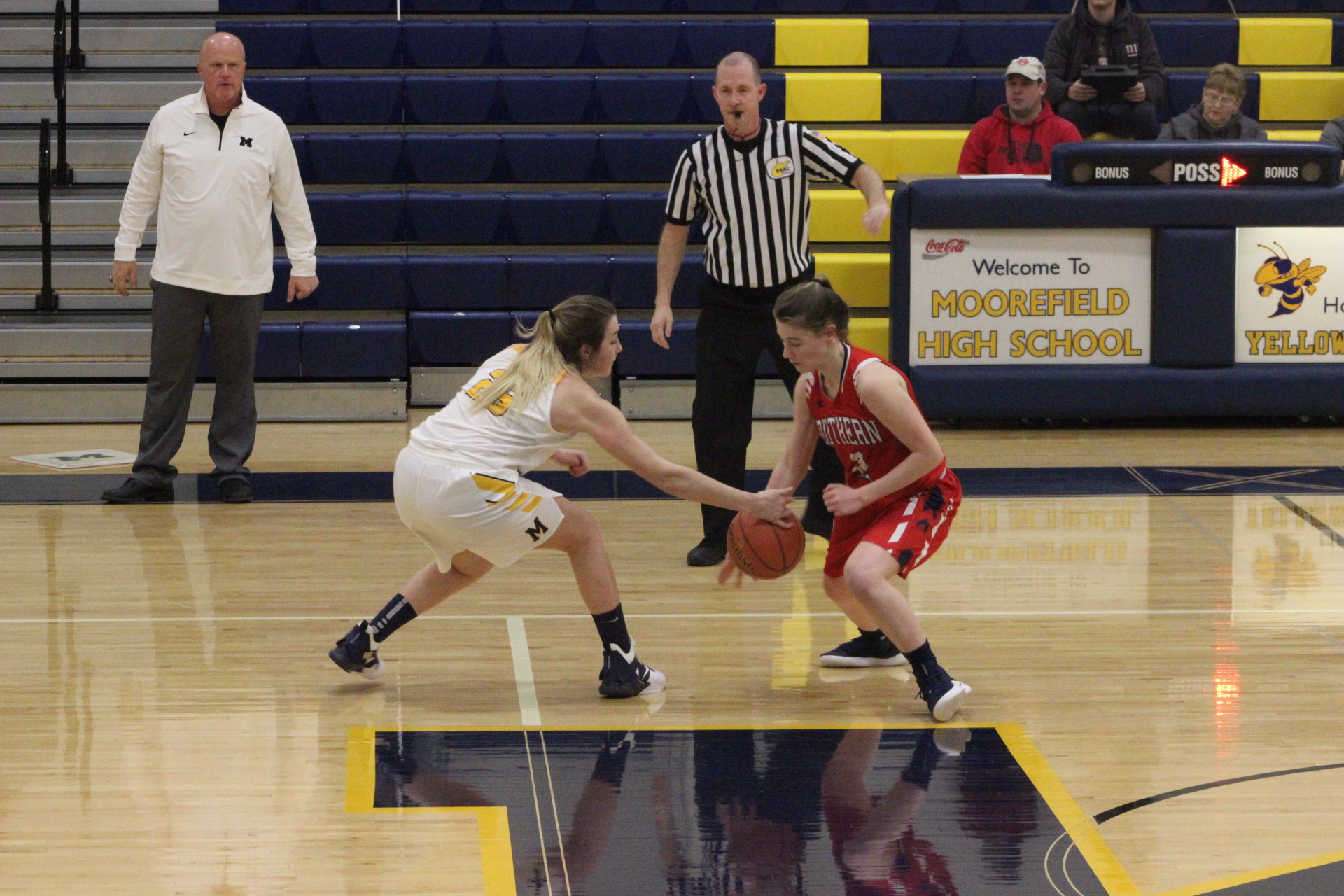 The Lady Yellow Jackets defended the Hive with a nine-point halftime advantage, but Southern Garrett found a way to penetrate the honeycomb scoring inside the paint causing it to crumble leading to a 50-48 victory rally on Friday night in Moorefield.

“[We] Played good first half. Thought we should have rebounded better. Defensively in third we didn’t step to help or deny cuts to basket. Gave up layups in third quarter. Needed to protect ball, had many turnovers that were unforced and just bad decisions. Definitely a game we let slip away. We cut that penetration off first half. We had way too many mental mistakes,” Moorefield coach Paul Keplinger stated.

Both teams had three players apiece scoring in double figures with Southern Garrett’s Hannah Owens scoring a game-high 16 points in the victory, followed by Brooke Davis with 14 markers and Jocelyn Evans added ten points; meanwhile Moorefield was guided by Madison McGregor with 13 points, followed by Lindsey Rinker with a dozen points and Lexi Gilhuys pitched in ten markers.

The Lady Rams cruised inside for layups in the second half as Moorefield struggled to recreate the success of denying the penetration from the first half.

Southern Garrett opened the game winning the tip-off, then Brooke Davis drew a foul on a block attempt by Moorefield’s Gianna Fair leading to one of two free throws made as the second ricocheted off the rim out of play.

Lady Rams pressure caused a turnover as the ball was mishandled at mid-court going backcourt.
Southern Garrett’s Hannah Owens netted a jumper to take a 3-nil lead at the 7:24 mark.
Fair connected with Remington Hinkle inside the paint as the Lady Yellow Jackets answered.

A layup by Lady Rams guard Jordyn Warnick pushed the lead back up to 5-2 at 6:24.

Moorefield missed two attempts, then the Lady Rams took it the other way with Jocelyn Evans drawing a foul and adding two foul shots.
Both teams missed baskets with rebounds by Owens and Gilhuys, with the latter defensive board leading to a 3-pointer by McGregor as the Lady Yellow Jackets cut the deficit to 7-5 at the 5:26 mark.

McGregor and Hinkle grabbed defensive rebounds over the next minute before Gilhuys landed a jumper to tie the game at 4:29.

After another Lady Rams miss, there was a jump ball for Moorefield.
McGregor dished to Gilhuys for a jumper which gave the Lady Yellow Jackets their first lead of the game at the 3:34 mark, 9-7.

Fair snatched a rebound, then passed to Rinker, who found McGregor for a jumper extending the edge 11-7 at 2:55.

Moorefield held the lead in the game, until just under three minutes remaining in the third period.
The Lady Rams recorded a shot coming from Owens on the ensuing possession.

A minute later after a pair of rim rockers, Fair made a block and steal which created a score by McGregor at 1:49.

Hinkle swiped the ball and was fouled in the process as Davis collided with her sending them to the floor.

Moorefield didn’t get a basket with Owens grabbing the rebound, then the Lady Rams hit the rim and Owens was there for the board passing to Davis drawing a foul for one free throw and Fair collected the next carom.

After a charge, Owens hit a jumper for Southern Garrett to pull within one, 13-12 with 35 seconds left in the first period.