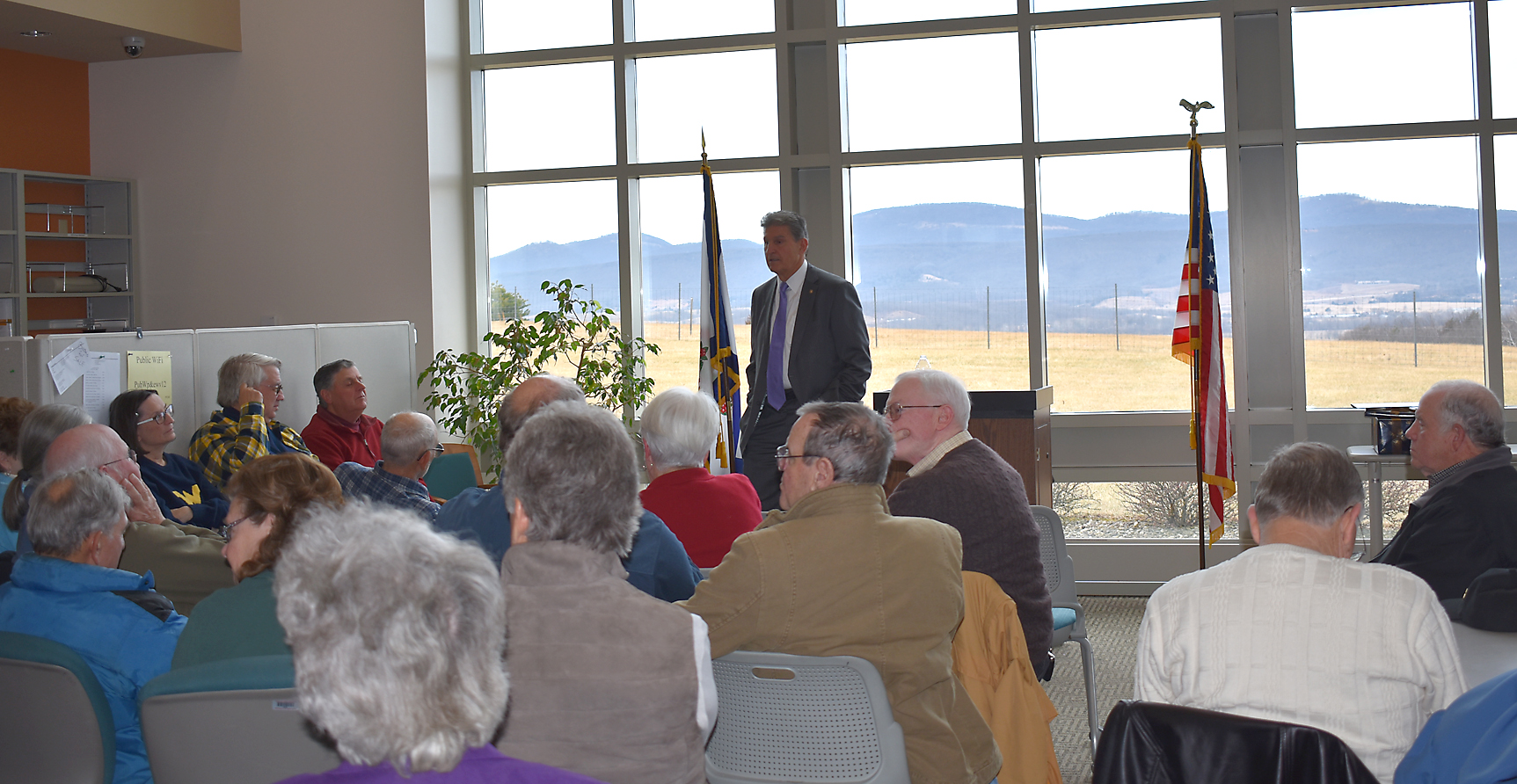 Sen. Manchin listens to comments from the public on a range of issues, including immigration, healthcare and VA services at Eastern WV Community and Technical College.

Joe Manchin had three tasks to complete on his visit to Moorefield on Wednesday, Jan. 31.

First and foremost, he presented a long-overdue medal to a Vietnam Veteran.
Elmer “Buzz” Ours, of Petersburg, served in the United States Army from January 1969 to January 1971. He was stationed in Vietnam with the 1st Cavalry Division, 11th General Support Aviation Company, 11th Aviation Group.

One day in November 1969, when his unit broke for lunch, Ours went off the trail to eat. He noticed Vietnamese attempting to ambush his unit, ran down the trail and caused the enemy to retreat. He was awarded a Bronze Star in April 1970, but he never received it.
Sen. Manchin presented Ours with his Bronze Star with Oak Leaf Cluster “V” Device for his meritorious service. Manchin also presented Ours with an American flag, which flew over the U.S. Capitol.

“This medal means so much to me,” Ours said after thanking his brothers and sisters for attending the ceremony. “This country needs more people like Senator Manchin who stands up for veterans.

Ours also thanked “anyone who puts on a uniform,” including police, firefighters, Army, Navy, Air Force, Marines and Coast Guard.

Manchin’s second task was to recognize Peggy Hawse, his regional coordinator, who is retiring.

“This lady has given her life to service to our state and county,” Manchin said. “She is a true model of public service.”

Hawse retired as an educator and administrator in Hardy County Schools, was the first employee at Eastern WV Community & Technology and later chairman of the Board of Governors. She was instrumental in the approval and construction of Eastern’s new campus. Hawse has worked for Manchin since his election to the U.S. Senate in 2010.

Manchin’s third task was to find out how his constituents in Hardy County felt about certain issues, primarily immigration.

“We live in a difficult time, a troubled world and a divided country,” he said. “But we’ve been here before. We made it out of the 60s. The country was equally divided.”
Manchin said the government shutdown at the end of January, “should never have happened.”