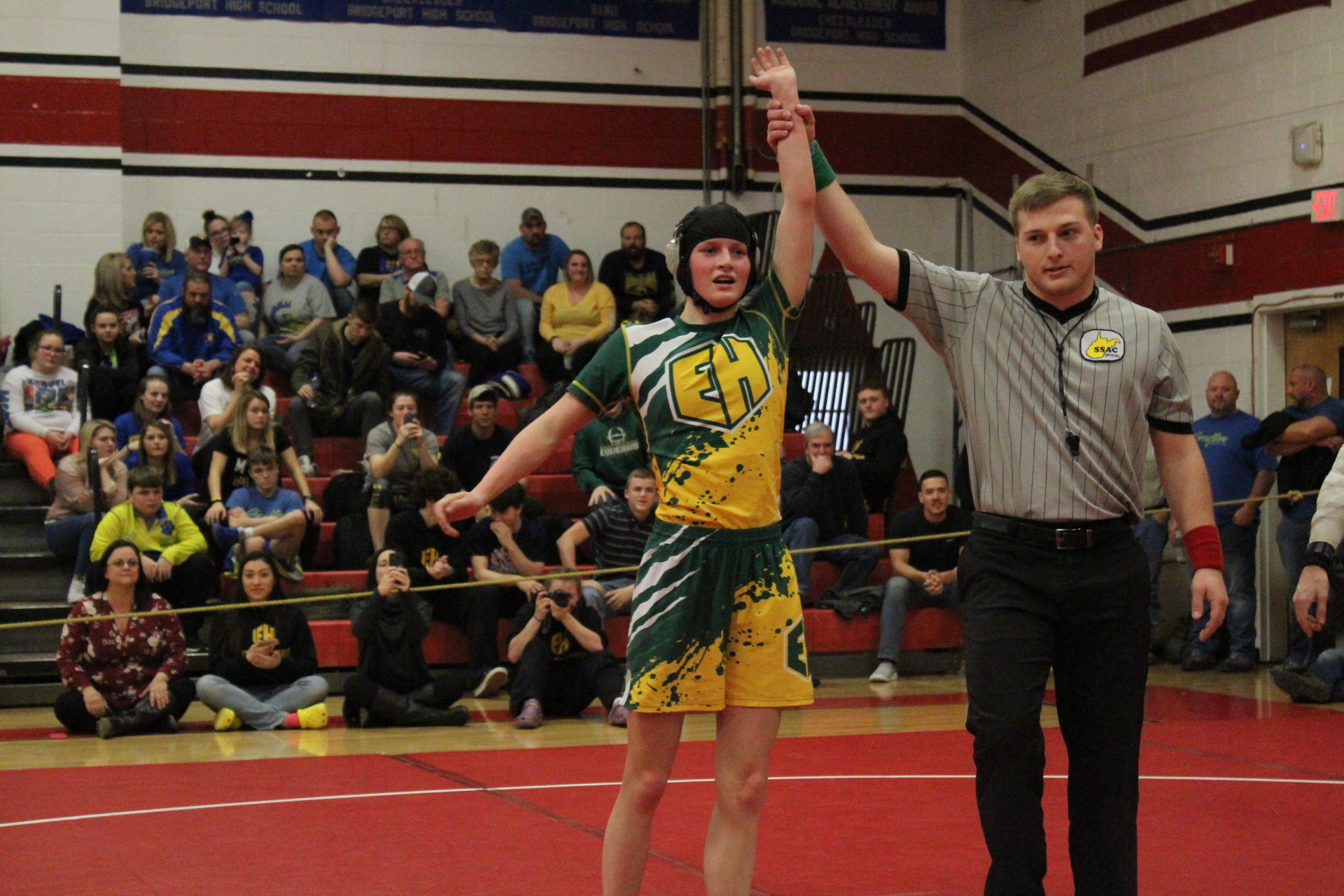 If there was a glass ceiling in Bridgeport, it would be shattered as history was made on the mat.
East Hardy Wrestling sophomore SierraMarie Miller became the first state bound grappler in program history with a fourth place medal at the Class AA-A Region II Wrestling Tournament last weekend and the Yellow Jackets join Miller with three wrestlers heading to the state tournament in Huntington.
Miller is the only female wrestler to qualify for the state tournament this season and her goal is to bring attention to the sport in hopes of growing the program at East Hardy and beyond.
Moorefield Wrestling will be sending senior captain Matthew Wright (bronze medal), sophomore captain Isaac Van Meter (silver medal) and sophomore Kevin Wetzel (bronze medal) to the state tournament along with Miller.
“We had a good tournament this weekend and plan to have another good tournament in two weeks. Monday we get back to work in practice, because we have unfinished business. I am pretty proud of them. Kevin went last year and Matt is a four-year wrestler, who has put in the work to get there. In the back of my mind, that is what I was hoping would happen this weekend since he is a senior captain and he did. We have to go back to practice. We have two weeks to prepare for the state tournament, because we have unfinished business,” Moorefield Wrestling assistant coach Larry Schoonover commented.
The experience for the Yellow Jackets will be familiar as Van Meter went last year as the region champion and finished with a bronze medal, Wetzel was a state representative with a regional fourth place medal and Wright was there as an alternate with a fifth place regional medal.
Miller has developed into a tremendous wrestler using a jiu-jitsu style attack latching on the back of opponents and using a combination of techniques to gain an advantage and her freshman season showed the potential with a fifth place medal at the regional tournament leaving the motivation to take the next step this year and Miller made it happen.
“I’m really excited and I can’t take all the credit. I had supporters along the way and our teammates were very supportive. The third and fourth match was interesting, but I gave it all I could,” East Hardy sophomore SierraMarie Miller noted.
“I hope people see our success and want to pursue wrestling. It’s kind of an intimidating sport, so I hope we get more involvement from people in the school and in the community.”
It has been a monumental season for both Moorefield and East Hardy Wrestling programs setting records for team victories and the Yellow Jackets had two grapplers in Wright and Van Meter surpass the 100-win career total.
Hardy County sent 15 wrestlers to the Region II tournament and seven returned home with medals.
East Hardy Wrestling selected eight grapplers to compete in Bridgeport: Emili Flynn (138-lb., senior), Patrick Helsley (170-lb., junior), SierraMarie Miller (113-lb., sophomore), Dayton Miller (182-lb., sophomore), Hunter Ames (220-lb., sophomore), Sky Spell (145-lb., sophomore), Conner White (152-lb., sophomore) and Damian Iman (132-lb., freshman).
SierraMarie Miller reached the championship semifinals to begin Saturday morning’s session, while brother Dayton Miller, Spell and Ames were in the consolation round with a chance to medal and reach the state tournament still alive.
Ames and Dayton Miller finished as sixth place medalists in the regional tournament.
“I am proud of all of them. Sierra worked her butt off and they all did. We are progressively getting better every year,” East Hardy Wrestling coach Stevie Miller remarked.
“We are upping the numbers in medalists and upping the numbers in state qualifiers in the future to keep getting better. I can’t say enough about the team across the board, they have worked really hard to get where they are right now. It is really special, we are growing our program and starting to get noticed. The kids are doing well and we look forward to coming back next year and doing better.”
Moorefield started Friday’s competition with seven wrestlers and four of them had an opportunity to medal and reach the state tournament on Saturday with Van Meter, Wetzel and Wright in the championship semifinals and Delawder in the consolation bracket.
The Yellow Jackets’ seven wrestlers competing in Bridgeport were: Matthew Wright (152-lb., senior), Joe Palm (285-lb., senior), Jake Frederick (182-lb., sophomore), Isaac Van Meter (170-lb., sophomore), Kevin Wetzel (145-lb., sophomore), Dominick Davis (138-lb., freshman), and Matthew Delawder (195-lb., freshman)
Van Meter was the Region II runner-up, Wetzel and Wright took third place medals and Delawder rounded out the medal count with a sixth place finish.
East Hardy Wrestling program’s female-only senior class of Emili Flynn, Marina Stotlemyer, Jasmine Abrell, Emma Lutz and Jessica Smith were each offered an invitation and scholarship to join the new all-female collegiate wrestling program starting next season at Alderson Broaddus University.