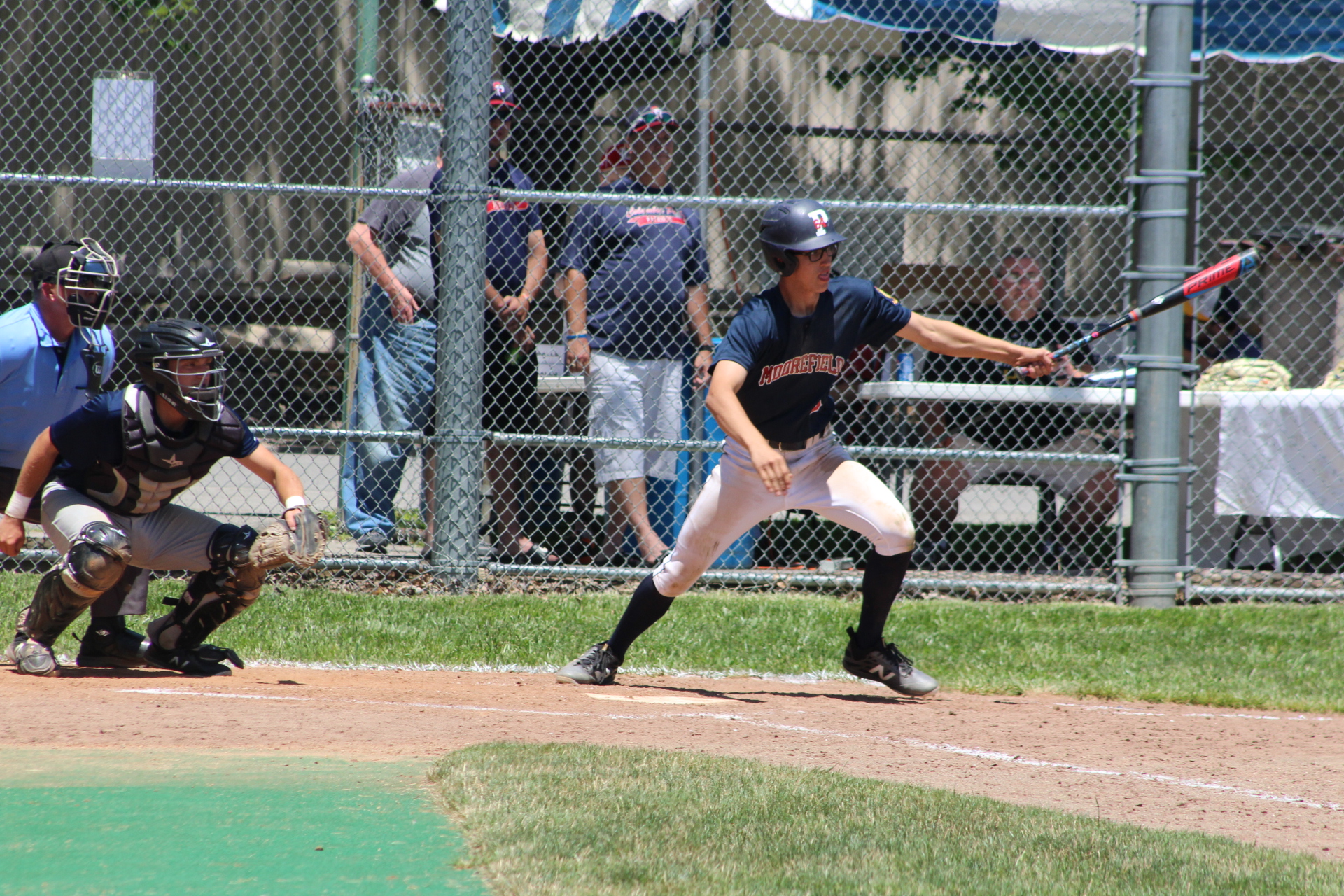 In a pitcher’s duel, Moorefield Post 64’s bats finally came alive breaking the scoreless game in the ninth inning during a 4-1 victory over Beckley Post 32 in the opener of the 28th annual American Legion Pizza Hut Hillbilly Hardball Classic in Elkins at Robin Harvey Field on Thursday morning.

Moorefield Post 64 pitcher Blake Watts was strong on the mound throwing seven strikeouts without any walks and allowing only four hits in seven innings of work on 102 pitches.

Beckley Post 32 pitcher Logan Stump was impressive with 15 strikeouts and allowed just three hits going into the ninth inning before two runs scored on an error on a 127-pitch count outing.

There was talk in the dugout about Watts having the right mojo, since he was wearing a blue jersey and that couldn’t be altered for the sake of positive energy.

“I thought Blake [Watts] threw the ball well. It has been awhile since he has pitched. I thought he left the ball down and kept them off stride with his off-speed stuff,” Moorefield Post 64 manager Ritchie Baldwin commented.

“Our bats are not with us right now and I don’t know where they are. They need to find them. We’re lucky that we got some runners on and made Beckley field the ball and throw it away otherwise we’d still be out there. I’m proud of the effort in our first game.”

In the first inning, Moorefield Post 64’s Isaac Van Meter was given a leadoff walk, but was stranded on a pop-up by Jayden Moore and two strikeouts by Stump to Hayden Baldwin and Jake Ours.

Watts took the mound putting Beckley Post 32 down in order sandwiching strikeouts to Isaac Miller and Stump around a pop-up by Kody Williams caught by Van Meter at shortstop.

After a groundout by Watts to begin the second inning, Moorefield Post 64’s Lane Ours received a free pass and stole second base before being left aboard as Jacob Mauzy and Derek Hoyt struck out.

In the bottom half, Beckley Post 32’s Peyton Brown and Tanner Buchanan went down on strikes before Jacob Sheets ripped a single and was stranded on a fly ball from Lane Jordan caught by Moorefield Post 64 left fielder Derek Hoyt.

Van Meter drew another walk in the third inning with one out, but couldn’t be brought home despite reaching third base on a stolen base and a sacrifice by Moore as Baldwin struck out.

Mauzy caught a popup by Beckley Post 64’s Adam Eppling, then Austin Amtower singled into center field collected by Jake Ours before Miller flew out to Ours and Williams flew out to Hoyt.

The top of the fourth inning was quick as Stump fanned Jake Ours, Watts and Lane Ours, yet the bottom half was just as fast as each outfielder for Moorefield Post 64 made consecutive catches starting with Ours in center, then Hoyt in left and Moore in right.