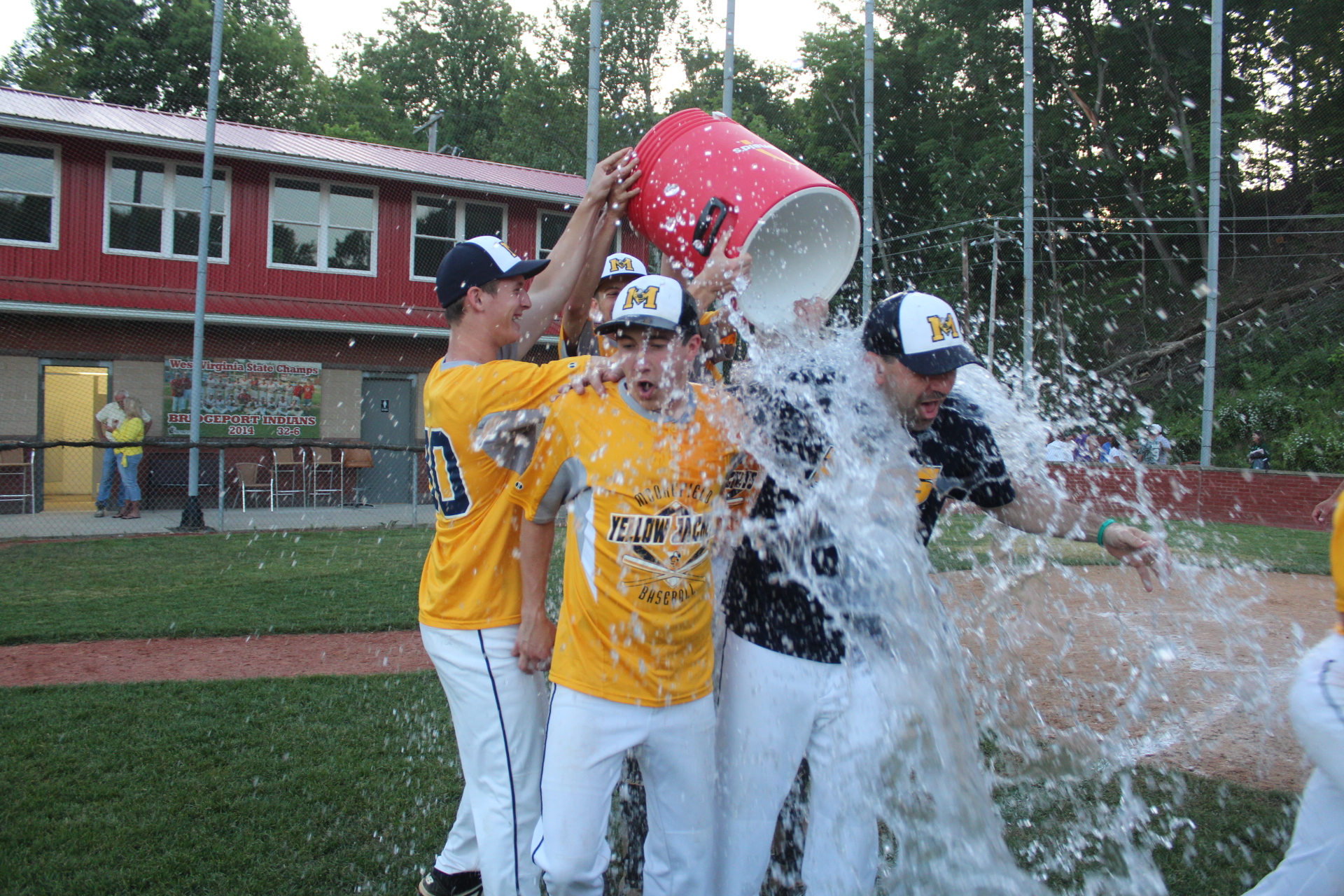 The Yellow Jackets battled in a tight pitchers duel with the winning run coming off the bat of Grant Keller in the fourth inning which was just enough for Moorefield to eliminate Notre Dame 1-0 at Bridgeport High School on Thursday to punch a ticket to the state tournament in Charleston.

Moorefield (20-9) makes the trip to the state tournament for the sixth time under coach Wade Armentrout with the first trip dating back to 2001 and seek a third state title in program history.

“It’s been a rewarding season up to this point, even to watch these guys celebrate like that and to know it’s a big moment in their life that they will always remember,” Moorefield coach Wade Armentrout commented.

“To win it the way we did, in that type of fashion knowing they were in a tight game having confidence in each other was great. Isaac going out there and getting it to a point where Derek can take over and he’s been so confident in that role as our closer. Both of these games were tough. We knew they had good pitching and we knew we had to get a couple hits and a couple runs. They are a good team. Our guys have been resilient through all of that. I thought we would hit more than we did today. On the journey we are on and the goal we have, there are games where you aren’t going to play your best. You have to find ways to win it, sometimes offense or sometimes defense. It’s great to watch the culture these guys have as teammates, they enjoy being around each other and they compliment each other, they know what their role is. They have a passion for the game and appreciate each other and that’s the reward I get.”

Moorefield freshman pitcher Isaac Van Meter allowed only three Irish hits and struck out four batters with one walk issued in five innings of work, then junior closer Derek Hoyt took care of business with three strikeouts and the defense sealed the win.

Notre Dame senior pitcher Todd Griffith kept the Irish in the game with 11 strikeouts and allowed only four hits and gave up three walks in the loss.

Griffith forced groundout by Moorefield leadoff batter Brent Moran to start the game with Elias Gordon fielding the ball at shortstop, then struck out Garett Haggerty.

The Yellow Jackets got on base with a single by Blake Watts into left field, who advanced on an error and was stranded on a strikeout to Jake Ours.

Notre Dame’s Sam Romano flew out to Haggerty in left field, then Brent Robinson singled off of Van Meter into center field and dashed to second base on an error by Jake Ours.

Van Meter struck out Gordon and Garrett Collins to prevent a run.

In the top of the second inning, the Yellow Jackets went down in order as Griffith recorded three strikeouts to Hayden Baldwin, Van Meter and Lane Ours.

Andrew Rogers reached base on an error for the Irish, then Hunter Emerson popped out to Watts at first base.

Griffith singled into left field to give Notre Dame two baserunners, but they were stranded on a groundout by Sam Snyder and a strikeout on Justin Frazier.

Moorefield’s Grant Keller singled in the top of the third inning and Thomas Williams drew a full-count walk for a scoring opportunity.

“It’s very special to advance to the state tournament. It’s not very often you get to perform at that level. Take a deep breath and approach the plate calm, cool and collected,” Moorefield senior Matt Mongold said.