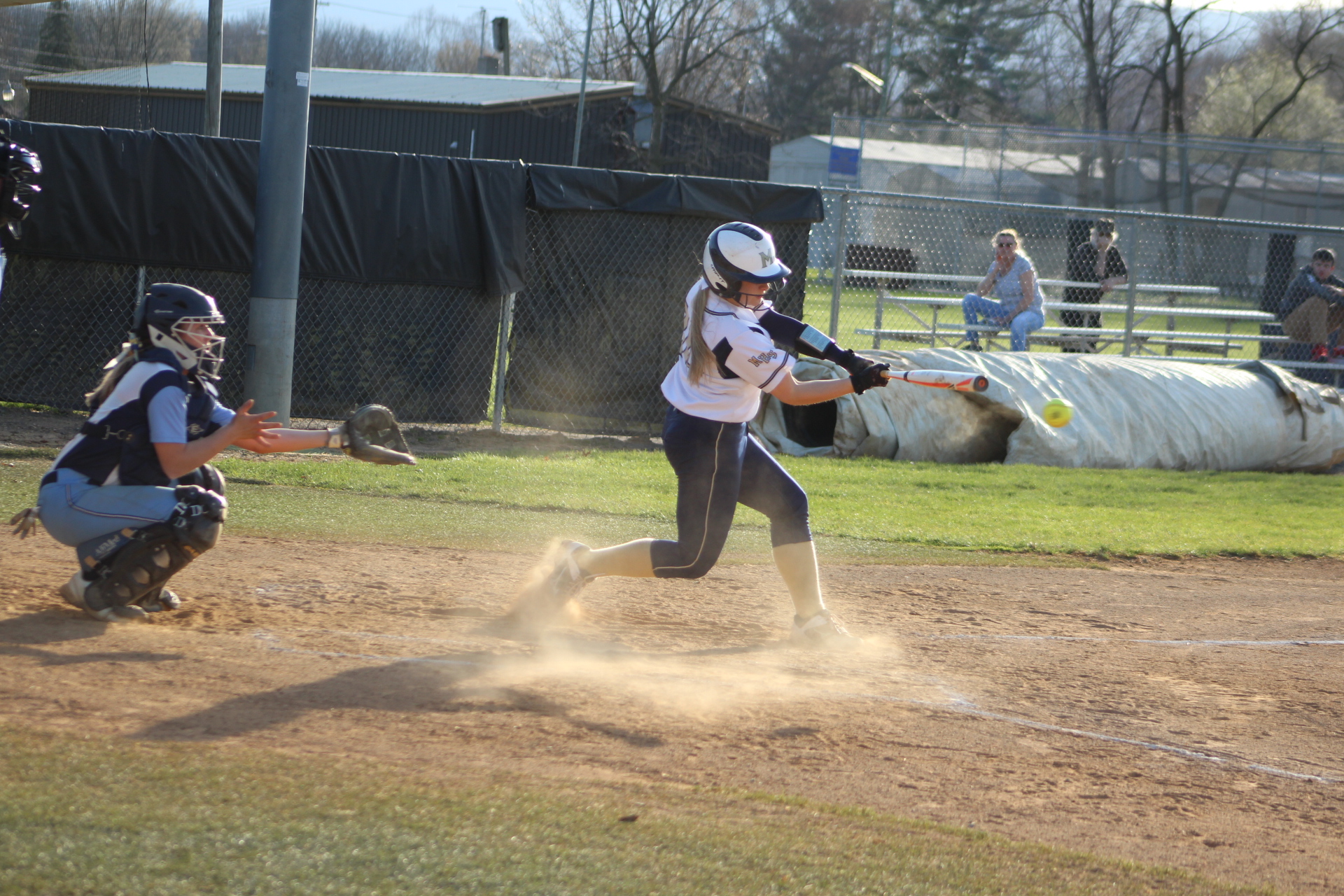 The Lady Yellow Jackets swarmed the bases with 11 runs in the opening frame and flew to a 15-0 advantage before settling down for a 15-3 three-inning victory over Pendleton County at Sager Field on Thursday.

Moorefield rebounded with a vengeance after suffering a 6-4 loss to Petersburg the previous evening and now improves to 7-3 on the season.

“I’m proud of them. We had a rough evening last evening with Petersburg the last inning,” Moorefield Softball Coach Tammie Ayers remarked.

“I think they showed up this evening to play the ball game if it went all seven innings. We wanted to get it done in a shorter amount of time, so we worked hard hitting and Alyssa [Vetter] pitched very well.”

Taylor Townsend responded with a single into left field for the Lady Wildcats.

After a stolen base, Vetter answered with a strikeout to Reyenne Colaw.
Pendleton County’s Mariah Huffman singled to Moorefield left fielder Remington Hinkle, who threw the ball home to prevent a run and Vetter fielded a grounder throwing to Hanna Carlson at first base.

Huffman pitched a walk to Moorefield leadoff batter Rebekah Markwood, who advanced on a passed ball.

Hinkle singled down the left field line to put two runners on the base path for the Lady Yellow Jackets.

Carlson produced two runs on an error during a fielder’s choice throw past third base and managed to advance to the same spot before scoring on a passed ball for a 3-0 lead.

Moorefield’s Anna Riggleman notched a single into left field, but was caught stealing second base on throw by catcher Taylor Townsend.

The Lady Yellow Jackets loaded the bases as Vetter drew a full-count walk, Macie Zirk was hit by a pitch and Madison McGregor was issued a free pass.

Moorefield’s Makaleigh Snyder launched the ball into right field where it eluded Colaw to enable the bases to clear on a triple for a 6-0 advantage.

Alyson Simmons singled into left field for the Lady Yellow Jackets after Snyder scored on a wild pitch.

Markwood reached base on an error, while Simmons was caught in a rundown at third base.

Hinkle hit a sharp grounder to third base and beat the throw to first base which was simultaneously dropped.
Carlson was given a walk which loaded the bases for Moorefield.

Riggleman connected for an RBI single with the help of an error to extend the lead to 8-nil.

Vetter smacked an RBI single into left field as the Lady Yellow Jackets continued the momentum.

Zirk plated two runs on an error in center field to create an 11-0 lead, then McGregor bunted out to end the inning.