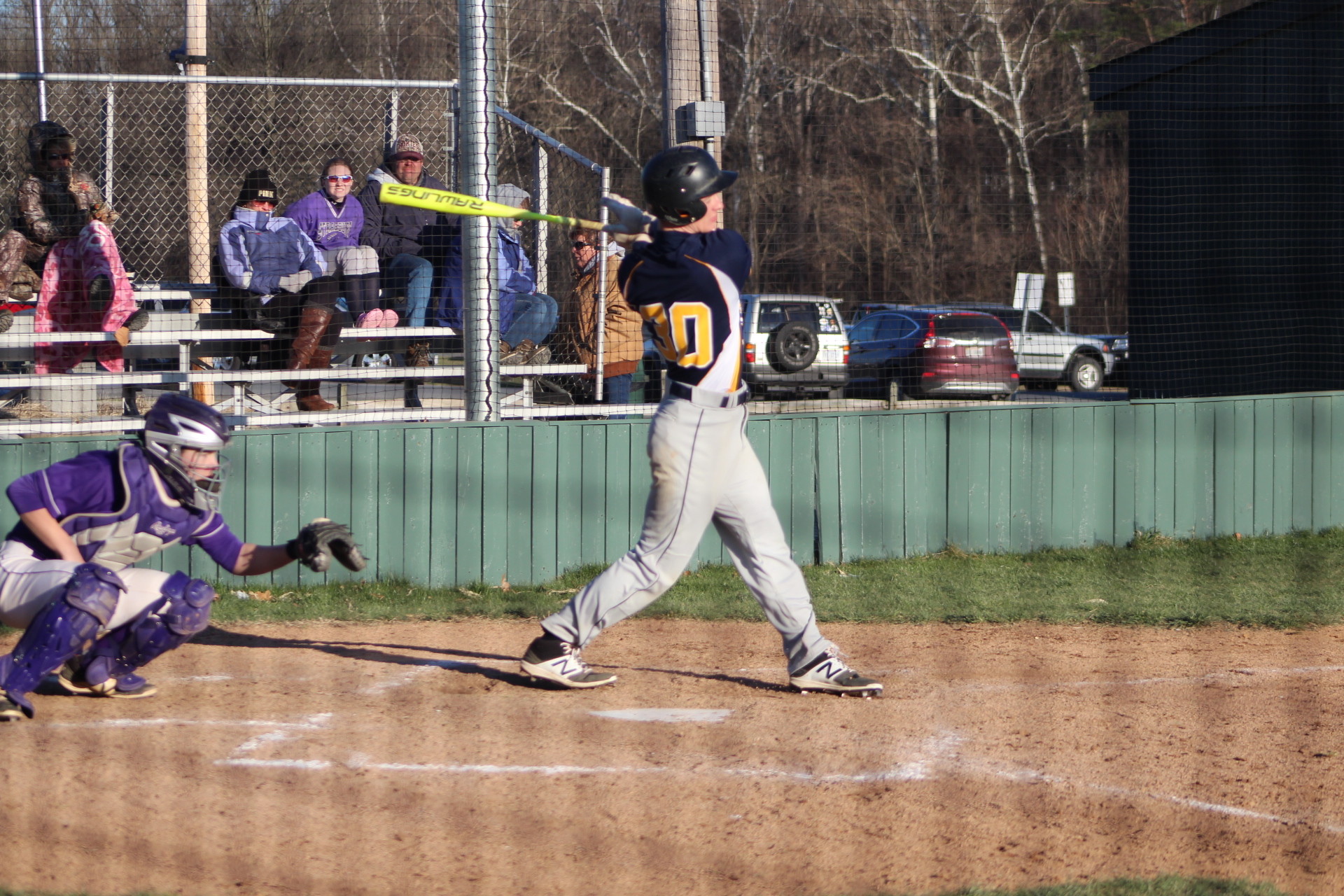 Embracing the cold, Moorefield shattered the ice with consistent heat at the plate generating a grand slam by Jake Ours and solo shot by Garett Haggerty to scorch the Rams 12-9 in Strasburg last Friday.

“It was great to see our pitchers did a fantastic job, they only walked to batters which put them ahead in the count and allowed Strasburg to put the ball into play. I really like how after we made an error, the pitchers just got right back on the mound and were resilient,” Moorefield skipper Wade Armentrout commented.

“They didn’t let it bother them and got ready for the next pitch. When we came to the plate, we had a lot of energy and excitement. What impressed me the most was everyone in our line-up contributed. Each batter scored at least one run, so we were very productive. Jake has been swinging the bat very well and works really hard, so I was really pleased to see him have that opportunity and the hard work he puts into the game paid off. We are going to rely on the seniors and all four contributed tonight.”

The first inning was scoreless as Strasburg pitcher Austin Miller got help from the defense as Moorefield senior Jake Ours flew out in right field, then issued a walk to junior Blake Watts, who advanced on a groundout by freshman shortstop Isaac Van Meter before being stranded on a flyout by sophomore second baseman Brent Moran to the right fielder.

Moorefield starting pitcher Blake Watts was on the mound for two innings and threw 42 pitches including two strikeouts, but allowed four hits and four runs scored.

The Rams went down in order as Ours caught a fly ball in center field, then Justin King hit a pop-up to Moran at second base and Watts fielded a grounder by Trevor Sager.

Moorefield freshman third baseman Hayden Baldwin came to the plate in the second inning and hit a deep fly ball into left field which was caught.

One could hear the chants from the dugout as Moorefield senior left fielder Garett Haggerty stepped up, then he ripped a solo home run over the left field fence and trotted home to a swarm of teammates at home plate cheering loudly as the Yellow Jackets went up 1-nil.

This hit created energy and momentum in the batter’s box as senior first baseman Matthew Mongold singled to third base side, then junior right fielder Derek Hoyt singled to right field with a laser line drive putting runners on the corners.

Moorefield sophomore catcher Lane Ours pushed a grounder to the third baseman and the Rams threw Mongold out at home plate with the side ending on a fielder’s choice off the bat of Moran.

Strasburg rallied for a 4-1 lead in the bottom of the second inning as Miller and Chase Hart singled into center field and both runners advanced on a passed ball.

Strasburg’s Cameron Harmon garnered a two-run producing single into left field with Haggerty making the throw to Lane Ours at home plate not getting the out as the ball dropped out of the glove on the tag attempt which allowed Harmon to advance to second base, 2-1.

After a single by Rams batter Justin Day, things got wild as Chris Shelton faked a bunt and Ours tried to catch the runner stealing at second base and the ball went awry, then the throw home didn’t connect and an error on a throw to third base allowed the next run to come home, 4-1.

Watts countered with a strikeout, then walked Patrick Kennedy.
A pickoff attempt went wrong and Kennedy raced over to third base, then Corey Keller got on base with a dropped third strike call on a wild pitch, but catcher Lane Ours alertly snatched the ball and made a diving tag and leap for the out on a failed steal of home.


Brother Jake Ours made the last out in center field to send the Yellow Jackets to the plate in the third inning trailing 4-1.