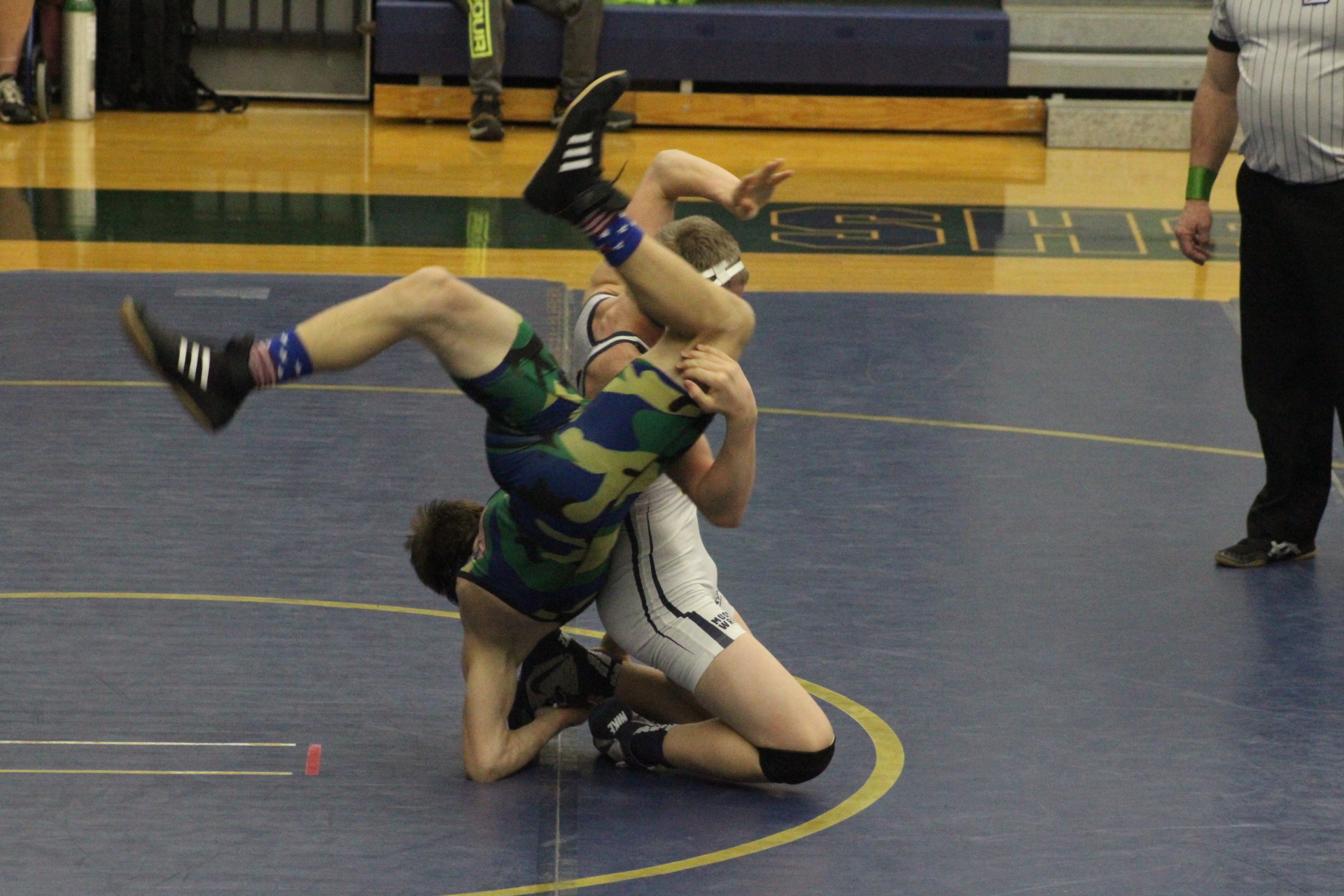 Moorefield Slays Dragons, But Judged By Hawks On Mat

Moorefield Wrestling landed in Front Royal slaying the William Monroe Dragons 42-27 before being sentenced by the John Handley Judges 55-12 and taloned by the Skyline Hawks 72-11 at Skyline High on Wednesday.

The Yellow Jackets garnered five pins in the victory against William Monroe to start the quad match duals and extended the most team season total wins in school history at 23 for an overall record after the duals at 23-18.

“The first match starting out against William Monroe, I think they are a 2A or 3A school in Virginia and as far as the number of kids they had and the number of kids we had from what I understand they are largely freshmen and sophomores as well,” Moorefield Wrestling Coach T.J. Van Meter commented.

Moorefield’s Vincent Cyrus got the duals started against the Dragons in the 152-lb. weight class, shooting for a single leg takedown by lifting William Monroe’s Josh Dillon’s right leg up before rotating around to his back falling to the mat.

Cyrus used a power half move and both wrestlers stood up, yet Cyrus refused to loosen the grip and took Dillon down again and maneuvered him to his back for a first period pin at 1:05.

Moorefield’s Isaac Van Meter battled against William Monroe’s Alex Hoffman in the 160-lb. weight class and went shooting first and Hoffman managed to spread out backing away.
Van Meter grabbed Hoffman’s right arm and yanked him to the mat and Hoffman attempted a head lock, but Van Meter spun out of the hold and wrapped his right arm under his chin to pull him down and tucked his other arm under the left leg for a cradle hold for back points.

Hoffman was rolled to the side and Van Meter’s head gear fell over his eyes, but Van Meter had a firm lock around the shoulder and under the left leg to put him on his back.
The wrestlers moved to the center of the mat after rolling out of bounds and Van Meter plowed into Hoffman holding his neck and created a cross-face cradle for the pin at the 1:58 mark of the first period to give the Yellow Jackets a 12-0 lead.

Moorefield’s Rodney Wratchford grappled against William Monroe’s Quinten Morris in the 170-lb. division for nearly two full periods before Morris got the upper hand with a pin at 3:59.
Morris made a shot and Wratchford stayed on top grabbing his left leg with Morris facing down and Wratchford spun around for a head lock before both rolled out of the circle.