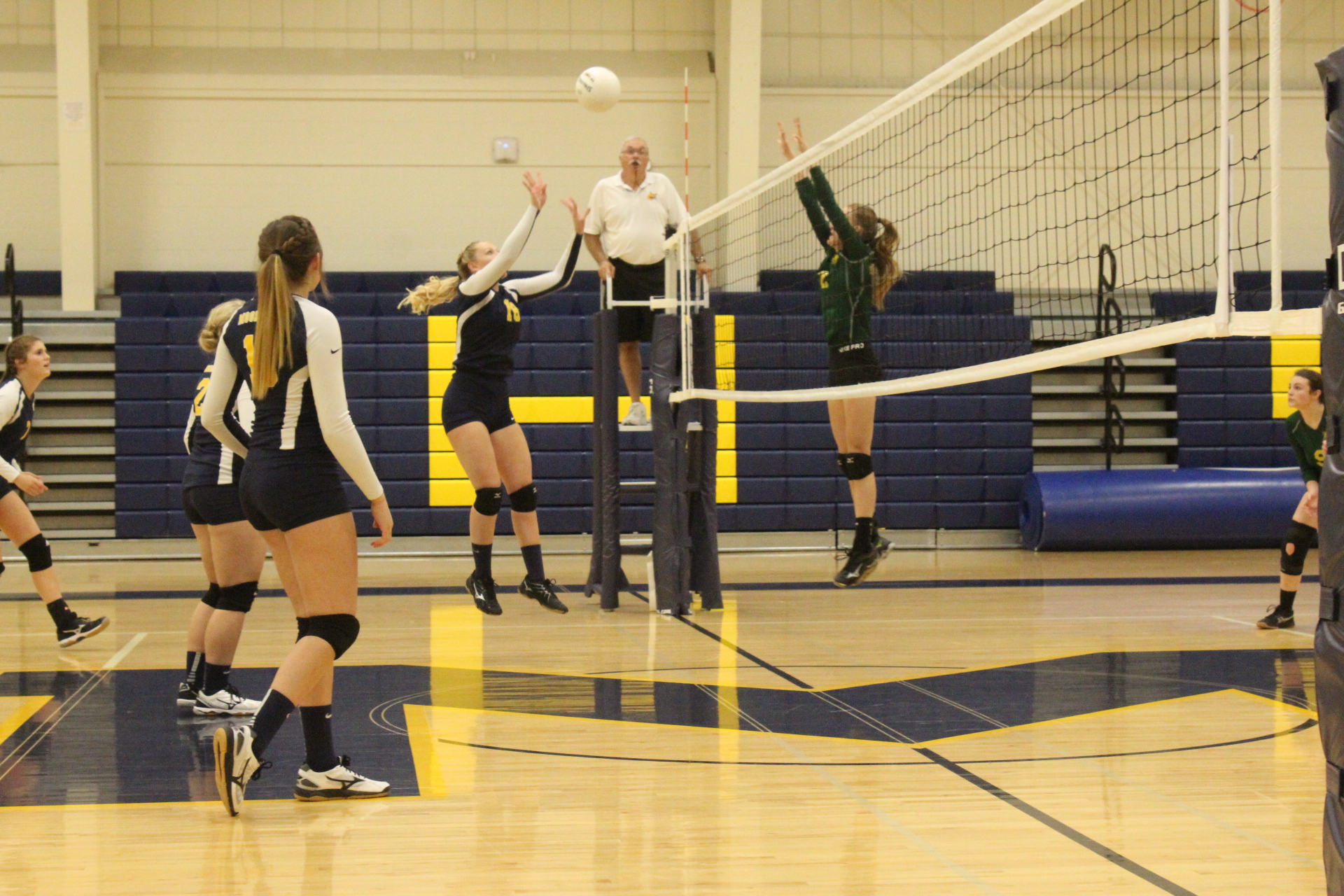 East Hardy Volleyball got tangled up in the net as the Lady Yellow Jackets swarmed the courts for a three-set match victory last Thursday in the Hive: 25-5, 25-23, 25-13.

“The first game they came out and it’s their homecoming week, so you worry about all the distractions going on. They came in and were really focused and the first game went pretty fast 25-5. That felt good to them, it was a great feeling,” Moorefield Volleyball Coach Morgan Hill-See commented.

“Second game, came back and got up, but we let our guard down a little bit. They clawed out of it defensively, we were scrappy and balls weren’t falling. We rotated a lot of new faces in there. Give the credit to all eight of them who were out there. They played well together and everything just came together. Any time you can beat East Hardy three and out, we’ll take it. They served well and placed the ball well. Every day we have to get better and as the season winds down, it can make or break you.”

Moorefield started the first set building a 3-0 lead on a kill by Alyssa Vetter, then an errant shot by the Lady Cougars and a tip for a point by Hanna Carlson.

An attack by East Hardy’s Rebecca Whetzel was met with a dig by Vetter and ricocheted out of bounds, then the Lady Yellow Jackets responded with a spike by Carlson.

After a volley by Carlson went out, the Lady Cougars hit the net thrice and a timeout came after Carlson added an ace for an 8-2 lead.

The next serve hit the net, then East Hardy’s serve from Makenzie Blair was kept in play by Moorefield’s Sydney Hardy and Rebekah Markwood took the pass from Lindsey Rinker for a spike.

Hardy served the ball into the net to make and the Lady Cougars took over briefly at the line as Molly Yates served an ace.

The Lady Yellow Jackets scored 16 consecutive points to close out the set which included seven aces by Markwood.

A net error by the Lady Cougars put Markwood at the service line for jump-style serving making two straight aces before teammate Gracie O’Neill made an attack which was redirected into the net.

Markwood nailed two more aces prior to a timeout and came back on the floor adding another ace for a 16-5 advantage.

An attack by Vetter was met with a carrying violation by the Lady Cougars, then an attack by East Hardy’s Rebecca Whetzel landed in the net.

East Hardy’s SierraMarie Miller hit the net on an attack, then Markwood found the floor twice on aces with one ball skipping off the top of the net.

Rinker pushed the ball over for a point, then a the Lady Cougars returned a serve into the net.

East Hardy fell behind 9-2 in the second set, but fought back to tie it up late in the set several times before being edged out by Moorefield 25-23.