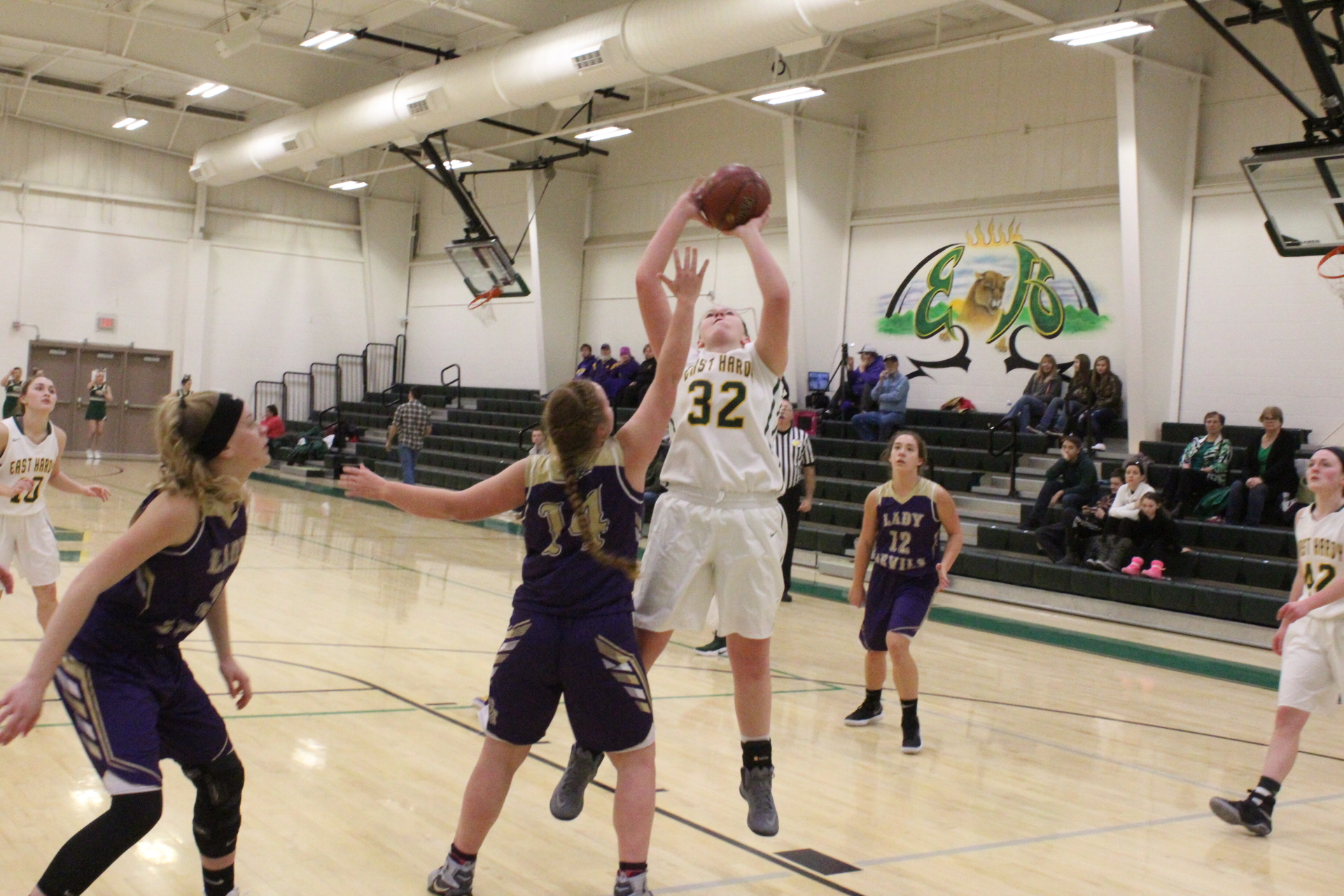 A thrilling 3-pointer buzzer-beater and a game-high 26 points by Julia Hahn wasn’t enough for the Lady Cougars to pounce over St. Marys as the Lady Blue Devils snatched a 59-42 victory in the second round of the West Virginia Hometown Invitational Tournament on Monday afternoon in Baker.

“Our freshman hitting the threes early and Addie Furr being unselfish and kicking it out in the corner for her realizing she is hot. Addie plays as hard as anybody I’ve ever coached. She started attacking and getting to the line. I knew East Hardy was down a player and not as deep as they have been. We just wanted to pressure them and control out of our zone all day. At times we were successful, but at times we weren’t,” St. Mary’s Coach Howard Meeks remarked.

“This is the smallest team I’ve had with a guard playing center. We had to box out. When we did it well, we kept them at bay. East Hardy started to run out of time and had to foul. We leaned too much on our leading scorers [Kylie] Wright and Furr. I helped found the Hometown Invitational Tournament. We’ve had our ups and downs. In our first few years we had snow and cancelled games which frustrated some teams and they got out. I think the teams that stuck it out are benefiting. It is just something positive for the kids. We probably could have been a higher seed, but this year we had to travel and came here to East Hardy. It was a nice drive across Route 33 and through Seneca and to Petersburg and Moorefield. I have made this trip trout fishing, but for most of these girls this is their first time to come over here. It is making memories and that is what this is all about.”

“We’re fortunate to get press being so close to Parkersburg, but this tournament helps the smaller schools get recognized. Colleena [Burdock] up at Union last year was first team all-state and I don’t believe she does without putting up 48-49 points in our tournament against Wirt County. That is one prime example of how this tournament benefits the teams. East Hardy had a nice start and has a younger roster mixing in with the upperclassmen. They had the injury and trying to find themselves. One thing I can count on when I see a team from East Hardy is they always play hard and they did that today,” Coach Meeks added.

St. Marys controlled the game with perimeter shooting early in the first period as Kylie Wright knocked down three triples and Ciara Bennett scored a pair from beyond the arch to hold a 20-12 advantage.
East Hardy countered with four field goals from Hahn and a pair from Brooke Miller in the opening frame, but Miller got into foul trouble with three fouls and had to ride the bench in the second period which altered the lineup as the Lady Cougars were without guard Leanna Basye due to an injury.