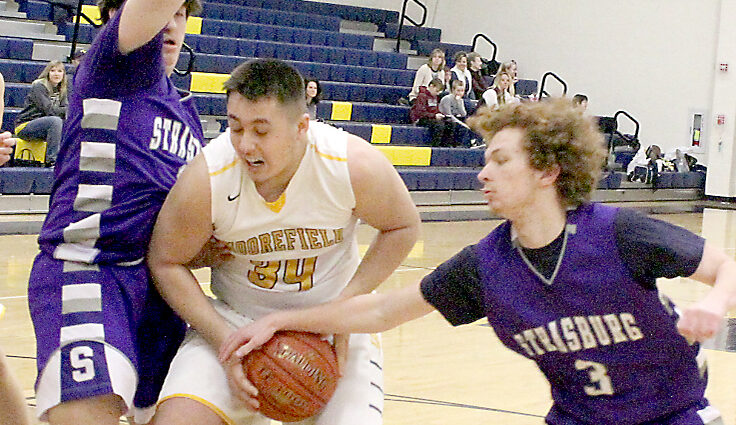 Strasburg Gets An Edge on Jacket Boys

Suffering a 16-point loss on the road in Strasburg forced the Yellow Jackets to change strategy in the Hive during a rematch which caused a roller-coaster ride with the Rams rumbling for a rally sealed with free throws for a 52-48 victory over Moorefield last Saturday afternoon.

“We played a lot of zone tonight and the kids did a good job playing zone for the most part and we rebounded well out of it 95 percent of the game. We just had a couple mental lapses that kind of killed us. They hit some big shots and they’re good shooters. For the most part we ran at them and ran them off the 3-point line, but they are good shooters and made some big shots when it counted. Jaydon See stepped up and did a really good job for us underneath. Some mental lapses and turnovers hurt us, some missed rebounds killed us,” Moorefield Boys Basketball coach Scott Stutler commented.

Strasburg’s Derek Fox scored a game-high 25 points in the win including a crucial free throw and steal in the last three seconds.

Moorefield held the lead from midway in the second period, until 5:21 remaining in the final stanza as the Rams crept back to the top of the mountain.

A goal-tending violation credited Strasburg’s Trevor Sager with a basket on the ensuing possession.

The Yellow Jackets missed a field goal, then Strasburg’s Ron Fox was whistled for a charge.

Kamyrn Pangle stole the ball and made a breakaway layup putting the Rams ahead 41-40 with 5:21 left.

Ron Fox collected a defensive rebound and the Rams slowed down the pace of the game before a foul sent Pangle to the line adding one free throw with 3:53 to go.

Moorefield’s Lane Ours snatched an offensive rebound and was fouled leading to one free throw made.

Strasburg collected the ricochet and passed the ball around for over a minute before Derek Fox knocked own a 3-pointer at the 2:05 mark.

Strasburg’s Trey Stinnette collected a defensive carom, but the Rams lost the ball out of play during a collision.

After a timeout, Moorefield’s Jaydon See assisted Chase Vance on a jumper slicing the Rams lead down to 45-43 with 1:18 on the clock.

A foul with one minute to go sent Pangle to the free throw line adding two more points for Strasburg.

Pangle forced a turnover knocking the ball to teammate Trevor Sager, who was fouled with 42 seconds remaining and added one foul shot.

Moorefield’s Trevor Shoemaker collected the rebound, but the Yellow Jackets lost the ball out of play within two seconds.

Strasburg called a timeout just before a five-second violation call, then Pangle was whistled for a pushing foul trying to gain separation on the inbound pass.