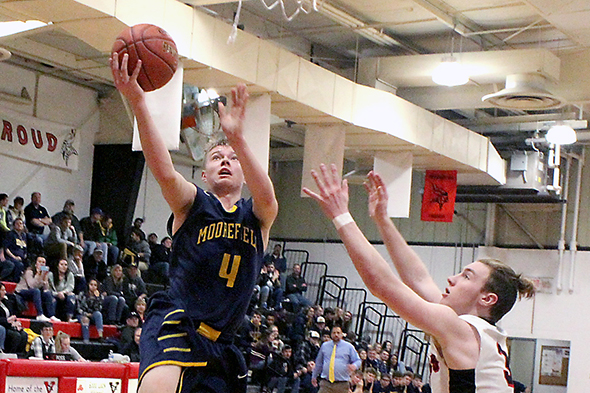 The Vikings marched to a 9-nil lead to commence the game and Moorefield rallied to take a lead in the second period before Petersburg countered for a 30-27 halftime edge and built a double-digit advantage entering the fourth period culminating in a 67-57 victory halting a five-game losing skid on Wednesday night in Petersburg.

“Moorefield is a great team and they bring a lot of pressure. You really have to be ready at all times, because they aren’t going to stop. I know we came out on a 9-0 run, but I told the guys we could run them. They played their butts off. We were lucky to have few shots go down and they missed a few shots. We did a few good things and knocked down some foul shots in the end. I am proud of the boys stepping up and knocking down foul shots to close it out. The defense is really what won it for us, we played solid defense tonight and did a lot of things right,” Petersburg Boys Basketball coach Todd Heare commented.

It was a rocky start for the Yellow Jackets (5-5), but determination to fight never diminished.

Petersburg (3-10) took the opening tip-off with a save by Slade Saville, then missed the initial field goal attempt with a deflection collected by Moorefield’s Trevor Shoemaker prior to a turnover with an over-and-back mid-court violation.

Dalton Lough drove into the paint and dished to Saville for the Vikings basket underneath the rim at the 7:07 mark.

Moomau assisted Saville on a jumper at the 6:01 mark giving the Vikings a 4-0 edge.

The Yellow Jackets fumbled the ball out of bounds, then Lough knocked down a 3-pointer on the ensuing possession for Petersburg.

Moorefield hit the rim again and Saville hauled in the board, then Petersburg’s Kahner Turner netted a put-back for the 9-nil advantage at the 4:45 mark and a timeout was called.

Moorefield’s Brent Moran dished to Chase Vance, who connected on a jumper simultaneously drawing a foul adding the additional marker to complete an old-fashioned three-point play at 4:34, 9-3.

Petersburg’s Lane Huffman drew a foul and made two free throws, then the Yellow Jackets lost the ball out of play.

After a rebound by Saville turned into a jump ball, the Yellow Jackets were given possession and Vance drilled a shot at 3:44, 11-5.

Lane Ours grabbed a defensive rebound for Moorefield, but Saville swiped the ball back and scored for the Vikings at 2:58.

Shoemaker cut across the top of the key and found Vance for a Yellow Jackets field goal at 2:31.

Huffman kept a Vikings possession alive with a rebound and Saville assisted Lough on a jumper.

Petersburg’s Kahner Turner made a steal, but was whistled for a charge moments later.

Huffman stole the ball and netted a layup for the Vikings at 1:49 to extend the lead 17-7.

Moorefield’s Thomas Williams sank a pair of charity stripe buckets at the 1:27 mark and the score remained at 17-9 entering the second period as both teams missed opportunities in the final minute.

Petersburg drew iron on ten field goal attempts in the second stanza as the Yellow Jackets buzzed back into the game.

Vance grabbed a defensive carom and was fouled on the ensuing Moorefield possession resulting in one free throw made.

Petersburg’s Cody Nuzum collected the board off the foul line shot, then the next Vikings shot hit the rim and bounced out of play.

Moorefield’s Brent Moran scored on a layup cutting the deficit to 17-12 at the 7:32 mark.

After a foul and a missed basket, there was a jump ball given to the Yellow Jackets and Williams drilled a jumper.

Jaydon See snatched a defensive rebound for the Yellow Jackets and Moran kept a series alive with an offensive rebound feeding See for a bucket at 6:23 slicing the score down to 17-16.

Both teams missed a couple of field goals over the next minute and change before a rebound by See led to a lead-changing layup by Moran giving Moorefield an 18-17 edge at the 4:44 mark.

Moorefield’s only lead of the game last for 22 seconds as Saville collected an offensive board and found Lough for a 3-pointer as the Vikings regained the lead 20-18.

In a span of 45 seconds, there were 3-pointers scored thrice times as Lough and Turner netted perimeter shots for Petersburg surrounding a trey by Moorefield’s Coleman Mongold with the Vikings going up 26-21 at 3:03.

Saville made a defensive rebound, then a loose ball off a missed shot went off the Yellow Jackets out of bounds.

Vance netted a put-back for Moorefield, then Lane Ours made a leaping save for a rebound.

Moran cleaned the boards several times before netting a basket as the Yellow Jackets made it a one possession contest with 1:21 remaining in the first half, 28-25.

Petersburg added two more points in the last minute on a layup by Huffman and Moorefield notched two free throws by Vance for a 30-27 score at the break.

The Vikings missed a few shots to begin the