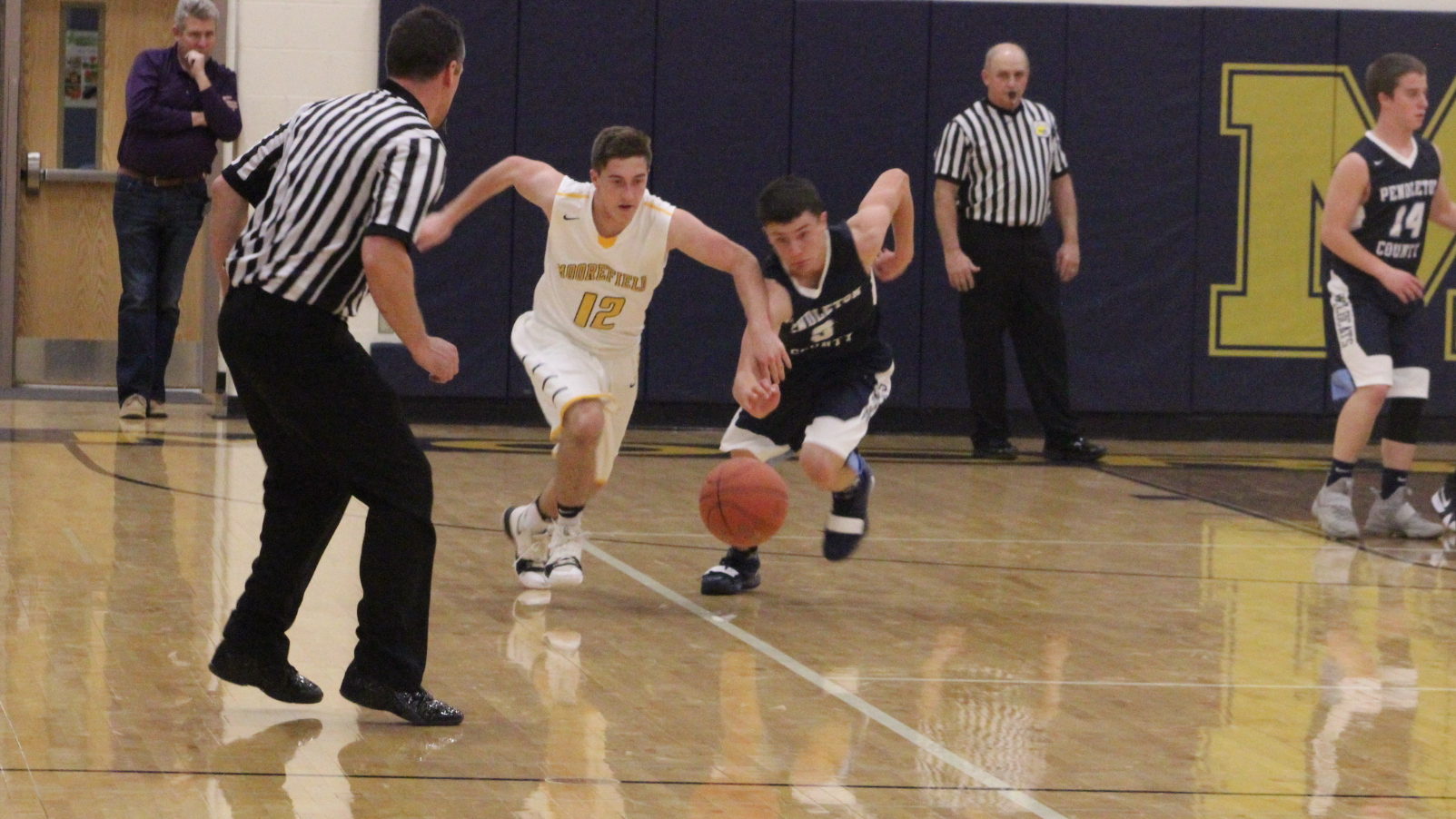 Wildcats Leave Moorefield Out in the Cold

Coming off winter break both teams struggled to break the ice on the rims combining for 50 missed field goals with the Yellow Jackets chipping away for a 17-14 halftime lead, but Pendleton County warmed up the hoop with late third quarter shooting as Moorefield became frigid during the Wildcats 55-41 victory last Wednesday in the Hive.

“We got into some foul trouble and they started pushing the pace. They played faster and more physical in the second half and we couldn’t keep up. We just need to make some shots and quit turning the ball over,” Moorefield coach Scott Stutler noted.

Pendleton County missed the game’s first shot attempt and Moorefield’s Thomas Williams hauled in the rebound, but stepped out of bounds in the process.

Brent Moran stole the ball back for the Yellow Jackets, then Matthew Jenkins cut into the paint and dished outside to Grant Keller, who hit the rim on a perimeter attempt with Moran snatching the board and his shot bounced off the rim out of play.

Keller grabbed a defensive rebound and passed to Moran, who made a spinning jumper in the paint for a 2-nil edge at the 6:30 mark for the Yellow Jackets.

Pendleton County answered with a layup by Bailey Thompson at the 5:55 mark.

Moorefield missed its next three shot attempts with rebounds going to Jenkins, then Pendleton County’s Marcus Sites with a foul on the Wildcats and Timothy Thorne with a foul on Moorefield.

Pendleton County missed a basket and the ball ricocheted out of bounds, then Laird Sweet stole the ball.
The Wildcats and the Yellow Jackets both walked, then Sites drew a foul and netted the pair of free throws for a 4-2 edge at 3:49.

Both teams missed opportunities to score, before Williams drew a foul and made both shots from the charity stripe to knot the game at 4-all at 2:04.

On the ensuing possession, Sweet scored on a jumper for Pendleton County to regain the lead.
Sweet snatched a defensive rebound, then Moorefield’s Jaydon See stole it away and passed to Moran for a bucket to tie it up at 1:15, 6-all.

“We made some adjustments at halftime. Our shot selection and our patience at times was almost too picky. We weren’t getting out in transition and we really wanted to pick up the tempo and that was the key to the second half. Before the transition, it was solid D forcing low percentage shots. We did a better job getting into our transition spots and collapsing in the paint instead of having to run an offensive set over and over again. From an energy standpoint and I think both ways, a 17-14 first half it was clear the kids weren’t in school today. They weren’t in their routine, but in a rivalry like this the kids need to bring their own energy from the get-go,” Pendleton County coach Ryan Lambert remarked.

Ten seconds elapsed before the Wildcats scored on a shot from Thompson and Pendleton County carried the 8-6 lead into the second period as the Yellow Jackets missed thrice in the closing minute and the Wildcats missed one.
During that stretch, Keller and Moran made rebounds for Moorefield and Thompson blocked a shot for the Wildcats.